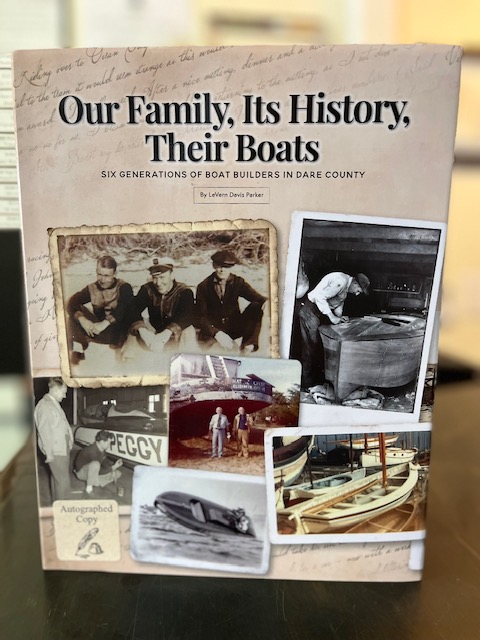 From The Coastland Times- Manteo native LeVern Davis Parker spent her early years on the water. Boats have been a constant in her life, connecting her to both the place she has called home for so long and to life beyond Roanoke Island. This particular form of transportation “runs in her DNA” and has for generations. Her new hardback book “Our Family, Its History, Their Boats: Six Generations of Boat Builders in Dare County” dives head first into an adventurous life as the daughter of a boat builder and where the call to the sea started.

The author’s family ties when it comes to boat building loop back to her great-great grandfather, George Washington Creef Sr., who was a ship carpenter during the second world war. He crafted a boat that could maneuver the shallow sound waters of Roanoke Island, known as a “shad boat.” In 1987, the General Assembly of North Carolina adopted the shad boat as the official state historic boat of North Carolina.

This book gives the reader a chance to meet the boat builders, take a glimpse into Manteo’s history and discover what life was like racing boats – who built them, where they ended up and who they met along the way. Parker shared that she gained a whole new family by attending races throughout her life. And family, along with independence, free will and perseverance, were values her father held in the highest regard. “My hope is that people will see that if you are willing to work hard and persevere through hard times that you can succeed at anything you want to do.”

LeVern's beautiful book now graces the shelves of Downtown Books and we are pleased to announce she will be with us greeting friends, talking boats and signing books on First Friday, October 7th, from 6pm - 7:30pm. Downtown Books is the independent bookstore on Roanoke Island serving the entire Outer Banks and has been voted Best Bookstore on the Beach three years running. We are located at 103 Sir Walter Raleigh Street in Manteo; to reserve a copy of LeVern's book or for more information call 252-473-1056.

OUR FAMILY, ITS HISTORY, THEIR BOATS