We are pleased to welcome back author Charles Oldham who has just released his latest book, Ship of Blood. Charles will be with us from 11am - 1pm signing copies of Ship of Blood and his previous book, The Senator's Son, another true crime/cold case 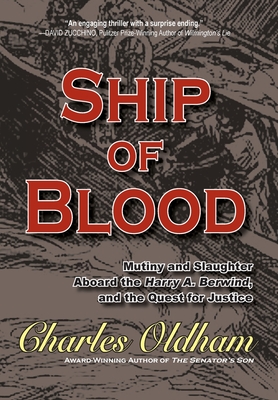 customer favorite at both of our stores!

ON AN OCTOBER NIGHT IN 1905, a horrifying scene was found on a wooden vessel off the coast of Cape Fear, North Carolina. Onboard the Harry A. Berwind, one crewman lay dead, his blood streaming down the deck. The four officers all were gone-murdered, too, it would turn out, their bodies dumped into the sea. Only three sailors remained alive, one tied up, all telling different stories, all blaming each other. The three sailors were Black. The dead officers were white. So began a legal spectacle that would captivate much of the nation's press and fuel a sensational trial in Wilmington. It was in Wilmington, after all, that shocking racial violence had occurred not long before, and now the city remained in the clutches of white supremacists. Most observers could have predicted a quick verdict and a triple hanging . . . if not an even quicker lynching. Yet the legal drama would defy predictions, lasting seven years, reaching the Supreme Court, pulling in presidents Teddy Roosevelt and William Howard Taft-then even being twisted into a fanciful, big-budget movie. In the end, so many participants-from jurors to lawyers to politicians-acted against type that justice had a fighting chance.

NOW FROM CHARLES OLDHAM, attorney and award-winning author of The Senator's Son, comes the first full account of this fascinating true tale. Beach Glass Books proudly announces the publication of Ship of Blood. Powerfully presented, it is a book not to be missed.

Ship of Blood: Mutiny and Slaughter Aboard the Harry A. Berwind, and the Quest for Justice (Hardcover)