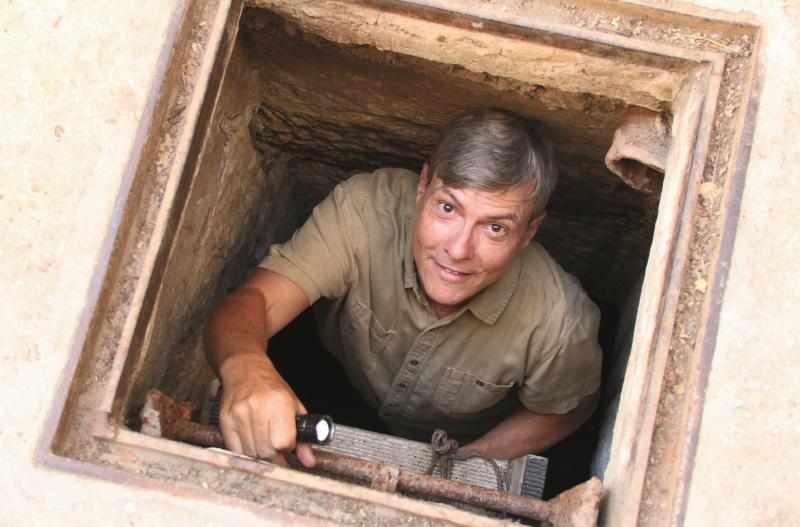 We are SO pleased to welcome Andrew Lawler back to the Outer Banks for a book talk and signing featuring his fascinating book Under Jerusalem: The Buried History of the World's Most Contested City. We are partnering up with the Bryan Cultural Series and the College of the Albemarle to bring Andrew to town for an evening discussing his book. Under Jerusalem takes readers into the tombs, tunnels, and trenches of the Holy City. It brings to life the indelible characters who have investigated this subterranean landscape. With clarity and verve, acclaimed journalist Andrew Lawler reveals how their pursuit has not only defined the conflict over modern Jerusalem but could provide a map for two peoples and three faiths to peacefully coexist.

"In 1863, a French politician and adventurer heard a rumor of biblical treasures beneath Jerusalem. At the time, Jerusalem was a venerable backwater, not the thriving religious center we think of today. Archaeology itself was in its infancy--more a pastime for treasure-hunting aristocrats than a legitimate scientific discipline. But when Louis-Felicien Joseph Caignart De Saulcy dug into the desert and discovered an ancient tomb, explorers from England, Germany, and Russia followed in his footsteps, competing with one another to make the next big find. De Saulcy's dig gave rise not only to a new field; it opened a Pandora's Box, turning Jerusalem into the most disputed piece of land on Earth"--

A remarkable, informative and entertaining speaker Lawler has been featured in numerous interviews and news articles and Under Jerusalem was reviewed by many of the prominent newspapers at publication.

"These untold stories of archeological digs near and under Jerusalem’s sacred sites convey all the colorful and violent and contentious history of the Israeli-Palestinian conflict…A compulsive read.” —Kai Bird, Pulitzer Prize–winning historian and author of The Outlier

Andrew is the author of The Secret Token, one of the best-selling titles at Downtown Books for over three years, which is the best investigation into the disappearance of the Lost Colony that we've ever read, as well as the best-seller Why Did the Chicken Cross the World?. As a journalist, he has written more than a thousand newspaper and magazine articles from more than two dozen countries. His byline has appeared in The New York Times, The Washington Post, National Geographic, Smithsonian, and many others. He is contributing writer for Science and contributing editor for Archaeology. Andrew’s work has appeared several times in The Best of Science and Nature Writing.

This is a free event and will be held in the Veterans Hall at the newly completed College of the Albemarle campus in Manteo. Copies of Under Jerusalem will be available for sale at the event and Andrew will be signing copies after his talk. Signed books will be shipped after the event. Our thanks to our event partners at the College of the Albemarle and the Bryan Cultural Series.