Capitalism at Risk, Updated and Expanded: How Business Can Lead (MP3 CD) 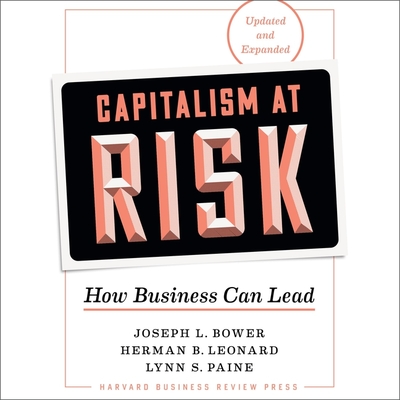 Capitalism at Risk, Updated and Expanded: How Business Can Lead (MP3 CD)


Email or call for price.
The spread of capitalism worldwide has made people wealthier than ever before. But capitalism's future is far from assured. Income inequality, resource depletion, mass migrations from poor to rich countries, religious fundamentalism, the misuse of social media and cyberattacks--these are just a few of the threats to continuing prosperity that we see dominating the headlines every day. How can capitalism be sustained? And who should spearhead the effort? Critics turn to government. In Capitalism at Risk, Harvard Business School professors Joseph Bower, Herman Leonard, and Lynn Paine argue that while governments must play a role, businesses should take the lead. For enterprising companies--whether large multinationals, established regional players, or small start-ups--the current threats to market capitalism present important opportunities. Capitalism at Risk draws on discussions with business leaders around the world to identify twelve potential disruptors of the global market system. Presenting examples of companies already making a difference, the authors explain how business must serve both as innovator and activist--developing corporate strategies that effect change at the community, national, and international levels.