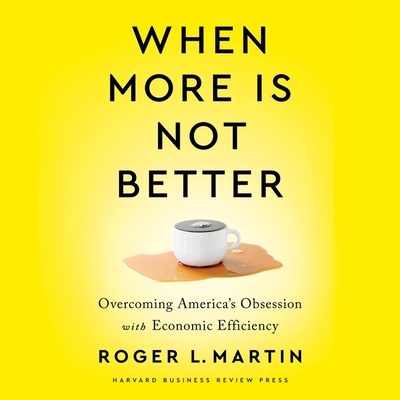 
Email or call for price.
For its first 200 years, the American economy exhibited truly impressive performance. The combination of democratically elected governments and a capitalist system worked, with ever-increasing levels of efficiency, spurred by division of labor, international trade, and scientific management of companies. But since then, outcomes have changed dramatically. Growth in the economic prosperity of the average American family has slowed to a crawl, while the wealth of the richest Americans has grown to a level never seen before. This imbalance threatens the American democratic capitalist system, which only works when the average family benefits enough to keep voting for it. In this book, Roger Martin starkly outlines the fundamental problem: we have treated the economy as a machine for which the pursuit of ever-greater efficiency is considered an inherently good thing. But it has become too much of a good thing. Our obsession with efficiency has inadvertently shifted the shape of our economic outcomes: from a large middle class and smaller numbers of rich and poor to a greater share of benefits accruing to a thin tail of already rich Americans. Filled with keen economic insight and advice for citizens, executives, policymakers, and educators, When More Is Not Better is the must-listen guide for saving democratic capitalism.