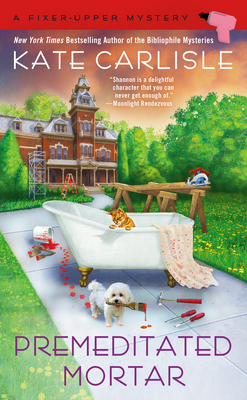 This is book number 8 in the A Fixer-Upper Mystery series.

Contractor Shannon Hammer gets tangled up in murder at a spooky old asylum in the latest Fixer-Upper Mystery from New York Times bestselling author Kate Carlisle. . . .

Shannon Hammer is about to embark on one of the biggest projects of her career. Her best friend Jane Hennessey has purchased one wing of the Gables, formerly the old state insane asylum, located on a bucolic hillside two miles northeast of Lighthouse Cove. Jane plans to turn her section into a small luxury hotel complete with twenty ocean-view rooms, a spa, and a restaurant.

Shannon is raring to get started on the enormous project and is shocked when a group of unruly protesters shows up at the groundbreaking ceremony and wreaks havoc. She’s even more freaked-out when someone pushes her into a pit of bricks in a closed-off room of the asylum. Despite her close call, Shannon wants nothing more than to get back to work . . . until she finds a body not far from where she was pushed. Now Shannon is determined to get to the bottom of the goings-on at the Gables even if it kills her. . . .
A native Californian, New York Times bestselling author Kate Carlisle worked in television for many years before turning to writing. A lifelong fascination with the art and craft of bookbinding led her to write the Bibliophile Mysteries featuring Brooklyn Wainwright, whose bookbinding and restoration skills invariably uncover old secrets, treachery, and murder. She is also the author of the Fixer-Upper Mysteries featuring small-town girl Shannon Hammer, a building contractor specializing in home restoration.