The Big Cheat: How Donald Trump Fleeced America and Enriched Himself and His Family (Hardcover) 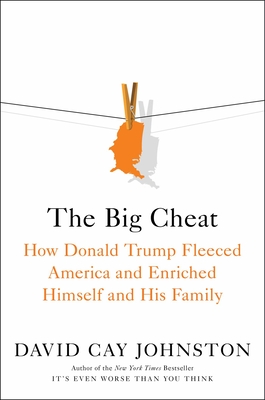 The Big Cheat: How Donald Trump Fleeced America and Enriched Himself and His Family (Hardcover)

While the world watched Donald Trump’s presidency in horror or delight, few noticed that his lifelong grifting quietly continued. Less than forty minutes after taking the oath of office, Trump began turning the White House into a money machine for himself, his family, and his courtiers.

More than $1.7 billion flowed into Donald Trump’s bank accounts during his four years as president. Foreign governments rented out whole floors of his hotel five blocks from the White House while lobbyists conducted business in the hotel’s restaurants. Payday lenders and other trade groups moved their annual conventions to Trump golf resorts. And individual favor seekers joined his private Mar-a-Lago club with its $200,000 admission fee in hopes of getting a few minutes with the President. Despite earning more than $1 million every day he was in office, Trump left the White House as he arrived—hard up for cash. More than $400 million in debt comes due by 2024, and Trump still lacks the resources to pay it back.

“Few people are as well positioned to write an exposé of the former president as Johnston” (The Washington Post), and The Big Cheat offers a guided tour of how money flowed in and out of Trump’s hundreds of enterprises, showing in simple terms how a corrupt president used our government for his benefit, even putting national security at risk. Johnston details the four most recent years of the corruption that has defined the Trump family since 1885 and reveals the costs of Trump’s extravagant lifestyle for American taxpayers.
David Cay Johnston is a Pulitzer Prize–winning investigative reporter and bestselling author of The Making of Donald Trump and It’s Even Worse Than You Think. He has lectured on economics, journalism, and tax policy on every continent except Antarctica and is a former president of Investigative Reporters & Editors (IRE). Johnston has been a frequent guest on MSNBC, CNN, the BBC, ABC World News Tonight, Democracy Now!, and NPR’s Morning Edition, among other shows, and was a consultant for the Netflix series House of Cards.

“Few people are as well positioned to write an exposé of the former president as Johnston. . . . The Big Cheat is a guided tour of the Trump circus in 18 colorful vignettes. . . .  A good book, full of old-fashioned reporting based on original sources and primary documents, colorfully written and convincingly argued.”
— James Kwak

"Refreshing. . . . Rather than simply tsk-tsking about Trump’s abuses, Johnston offers common-sense solutions for bringing transparency and integrity back to politics and government."
— Booklist