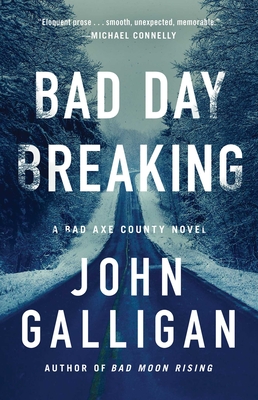 This is book number 4 in the A Bad Axe County Novel series.

Wild Wild Country and Longmire meet in the latest in the “gritty, brash, and totally gripping” (The Real Book Spy) Bad Axe County series, as Sheriff Heidi Kick struggles to prevent a radical religious sect from turning her county into the next Jonestown, all while a dark secret from her past puts her life in danger.

A strange religious sect has arrived in Bad Axe County, Wisconsin. Armed with guns, an enigmatic spiritual leader and his followers set up their compound in an abandoned storage lot. It’s not long before rumors start to spread of sadistic rituals and a planned takeover of the local government. But when one of the followers is found dead in the river, that’s when full-on panic sets in.

Sheriff Heidi Kick may not be a fan of the new group, but she is also dismayed by the hostile reaction of the Bad Axe community. With a murder investigation on her hands, the situation becomes more complicated when Sheriff Kick finds out an ex-boyfriend from her youth is out on parole early and looking to hunt her down. With a tumultuous snowstorm on the horizon, the cult members are on the verge of freezing, Bad Axe is on the edge of violence, and Sheriff Kick is just one false step away from losing her family, her town, and her very life.

By a writer at the height of his powers, Bad Day Breaking is a thrilling mystery that explores the price paid for following false leaders and the power we each have to triumph over trauma.
John Galligan is the author of four Bad Axe County novels including, Bad Axe County, Dead Man Dancing, and Bad Moon Rising. He is also the author of the Fly Fishing Mystery series, The Nail Knot, The Blood Knot, The Clinch Knot, The Wind Knot, and the novel Red Sky, Red Dragonfly. He lives and teaches college writing in Madison, Wisconsin.

“Galligan unfurls his story with ease, breathing life into every character.” —The New York Times

“Stellar…Galligan elevates his already impressive game with this one.” —Publishers Weekly (starred review)

“Bad Day Breaking is a page turner of the first order, with a killer cliffhanger that will have readers anxiously awaiting Sheriff Kick’s return.” —BookPage

PRAISE FOR THE BAD AXE COUNTY SERIES AND JOHN GALLIGAN

"As unique a place in the mystery universe as you will ever find and in the eloquent prose of John Galligan it comes alive in a ride that is smooth, unexpected, and memorable. This book is a diamond in the rough."—Michael Connelly, #1 New York Times bestselling author of The Law of Innocence

“As the pages turn, the author prompts readers to consider a range of timely issues (climate change, homelessness, corrosive wealth) via masterfully executed and action-packed storylines that coalesce in a shockingly memorable final act sure to leave readers eager for the next Bad Axe County thriller.” —BookPage (starred review)

“A heady combination of brooding meditation and adrenaline-fueled action…Galligan writes swift, atmospheric prose that will keep the pages turning.” —Crimereads

“Suspenseful…Readers will root for Kick as the action builds to a satisfyingly hard-edged denouement. Fans of gritty rural crime, such as Ace Atkins’s Quinn Colson series, will be enthralled.” —Publishers Weekly

“Madison author Galligan has written another gritty, gripping addition to his series set in rural Wisconsin. Kick, as her name implies, strikes hard when she’s forced to.” —Milwaukee Journal Sentinel

"If Joseph Conrad had really wanted to find the heart of darkness, he’d have looked in Bad Axe County. Lurking in the isolated coulees at the edge of the Mississippi River are some of the meanest, foulest, cruelest hearts imaginable, and John Galligan evokes them with all the intensity of a mad poet. But in county sheriff Heidi Kick, a woman chipped and broken on every edge, Galligan offers a righteous force in opposition...A dark beauty of a novel."
— William Kent Krueger, New York Times Bestselling author of Desolation Mountain