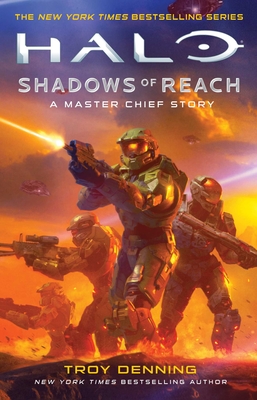 This is book number 27 in the Halo series.

October 2559. It has been a year since the renegade artificial intelligence Cortana issued a galaxy-wide ultimatum, subjecting many worlds to martial law under the indomitable grip of her Forerunner weapons. Outside her view, the members of Blue Team—John-117, the Master Chief; Fred-104; Kelly-087; and Linda-058—are assigned from the UNSC Infinity to make a covert insertion onto the ravaged planet Reach.

Their former home and training ground—and the site of humanity’s most cataclysmic military defeat near the end of the Covenant War—Reach still hides myriad secrets after all these years. Blue Team’s mission is to penetrate the rubble-filled depths of CASTLE Base and recover top-secret assets locked away in Dr. Catherine Halsey’s abandoned laboratory—assets which may prove to be humanity’s last hope against Cortana.

But Reach has been invaded by a powerful and ruthless alien faction, who have their own reasons for being there. Establishing themselves as a vicious occupying force on the devastated planet, this enemy will soon transform Blue Team’s simple retrieval operation into a full-blown crisis. And with the fate of the galaxy hanging in the balance, mission failure is not an option…
Troy Denning is the New York Times bestselling author of more than forty novels, including Halo: Shadows of Reach, Halo: Oblivion, Halo: Silent Storm, Halo: Retribution, Halo: Last Light, a dozen Star Wars novels, the Dark Sun: Prism Pentad series, and many bestselling Forgotten Realms novels. A former game designer and editor, he lives in western Wisconsin.