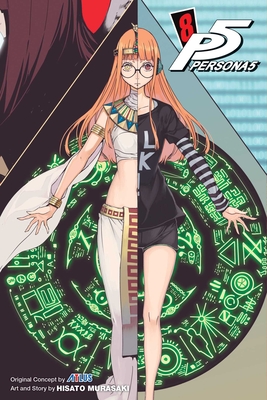 By Hisato Murasaki, Atlas (From an idea by)

This is book number 8 in the Persona 5 series.

Based on the popular video game, this manga’s phantom thieves will steal your heart!

After being arrested and having to transfer to a new high school in Tokyo, Akira Kurusu is given the goal of rehabilitation and awakened to a new power—the power of one’s true self, a Persona. Using his Persona and the mysterious navigation app Mementos, Akira and his friends take on the role of Phantom Thieves, saving people from the twisted desires of those around them.

The worldwide cyberterrorism organization Medjed has targeted the Phantom Thieves, threatening to shut down all of Japan if they don’t reveal themselves! But Akira receives a message from the mysterious Alibaba, who has a special offer for the Phantom Thieves—steal a certain person’s heart, and they will take care of Medjed. But that person is none other than Sojiro Sakura’s adopted daughter, Futaba Sakura! With this wrench in their plans, will the Phantom Thieves be able to deliver in time?
Hisato Murasaki is a manga artist and illustrator from Japan. He has created illustrations for a number of manga and novel series, including Hyakume no Kishi (Knight of 100 Eyes), The Case-Book of ENA, the D-Crackers series, and Bravely Archive: D’s Report. He also wrote the manga Boku no Mawari no Uchuujin (The Alien Around Me). He started work on Persona 5 in 2016.