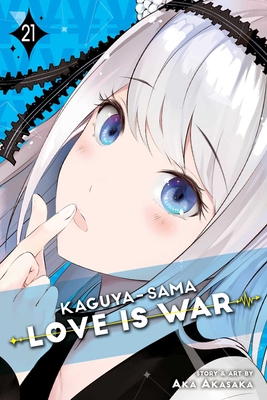 This is book number 21 in the Kaguya-sama: Love is War series.

Two high school geniuses scheme to get the other to confess their love first.

Will Yu be able to handle Tsubame’s answer to his love confession? Then, dropping by Miyuki’s home unannounced surprises Kaguya more than the Shiroganes. As Kaguya’s family interferes with her future plans, she becomes determined to break free of them, but first she must strike a deal with the devil!

Seating arrangements matter.
Aka Akasaka got his start as an assistant to Jinsei Kataoka and Kazuma Kondou, the creators of Deadman Wonderland. His first serialized manga was an adaptation of the light novel series Sayonara Piano Sonata, published by Kadokawa in 2011. Kaguya-sama: Love Is War began serialization in Miracle Jump in 2015 but was later moved to Weekly Young Jump in 2016 due to its popularity.