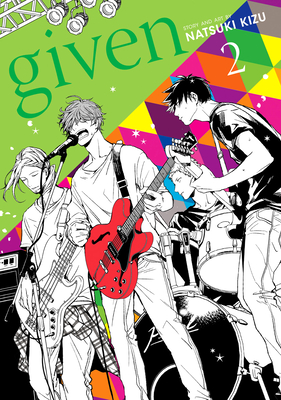 This is book number 2 in the Given series.

As the band races toward their first live concert, Mafuyu struggles to write lyrics for their new song but can’t find the words to express the emotions burning within him. Meanwhile, Uenoyama hears rumors about Mafuyu’s past and is bewildered by his own feelings. The tension builds until the night of the show, when the band explodes into a raging, life-changing performance.
Natsuki Kizu made her professional debut in 2013 with Yukimura Sensei and Kei-kun, followed by the short story collection Links and her breakout series, Given, which has been adapted into drama CDs and an animated TV series. To find out more about her works, you can follow her on Twitter at @kizu_ntk.
“Will grab your feels and refuse to let go.”—BookRiot, BEST MANGA 2020: NEW TITLES TO CHECK OUT THIS YEAR
— BookRiot