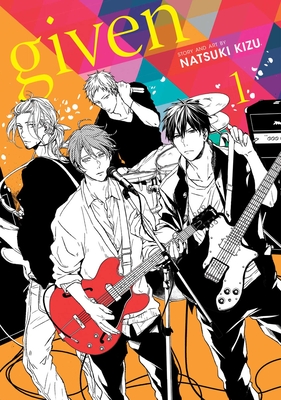 This is book number 1 in the Given series.

Ritsuka Uenoyama is bored with it all—with school, with his basketball club, and even with his one true passion: playing guitar. That is, until the day he finds his favorite hidden napping spot occupied by a strange boy cradling a broken-stringed guitar. At first, Uenoyama is nonplussed by Mafuyu Sato and his slightly odd behavior, but when, on a whim, he asks Mafuyu to sing, the power of that song pierces him to the core.
Natsuki Kizu made her professional debut in 2013 with Yukimura Sensei and Kei-kun, followed by the short story collection Links and her breakout series, Given, which has been adapted into drama CDs and an animated TV series. To find out more about her works, you can follow her on Twitter at @kizu_ntk.
“Will grab your feels and refuse to let go.”—BookRiot, BEST MANGA 2020: NEW TITLES TO CHECK OUT THIS YEAR
— BookRiot