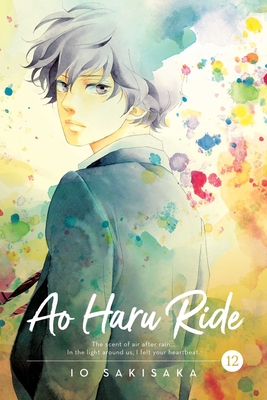 This is book number 12 in the Ao Haru Ride series.

Futaba Yoshioka has encountered her first love again in high school, but he seems different from the boy she once knew. Kou no longer wants to hold back how he feels about Futaba. He’s determined to keep trying as long as he has even a sliver of a chance with her. Meanwhile, Futaba has decided to be more honest in her relationship with Toma, but is her heart still in it?
Born on June 8, Io Sakisaka made her debut as a manga creator with Sakura, Chiru. Her works include Call My Name, Gate of Planet and Blue. Strobe Edge, her previous work, is also published by VIZ Media’s Shojo Beat imprint. Ao Haru Ride was adapted into an anime series in 2014. In her spare time, Sakisaka likes to paint things and sleep.