You Can't Write City Hall: What Happened When a Stand-Up Comedian Got Elected Mayor (Paperback) 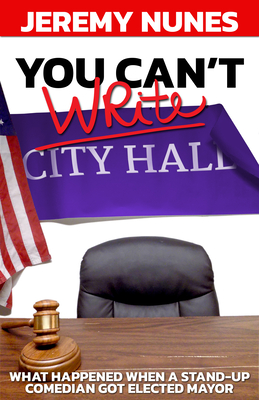 What would you do if you were ACCIDENTALLY elected mayor of your hometown? This book is based on the hilarious true story, straight from the perspective of comedian Jeremy Nunes, of what happened when he accidentally got elected mayor of the small-town of Dawson, Illinois. Midwest Book Review says, "You Can't Write City Hall cultivates a delightful blend of insights on political processes, memoir, and a comedian's unique perspective."

The Epoch Times simply said, "Tremendous " Governor Mike Huckabee called it, "Absolutely hilarious " You Can't Write City Hall shares the same humor as Parks and Recreation, Schitt's Creek, Corner Gas, and Lake Wobegon Days. Best-selling author Jeremy Nunes is a Second City graduate, featured on Dry Bar Comedy and Amazon Prime, who simply wanted to do some good and help his hometown. Instead, he put himself right in the middle of a real-life comedy. You'll laugh as Jeremy tries to inspire the board room's rustic characters, motivate quirky employees, and appease the complainers from his one-horse town. You'll find yourself rooting for Jeremy as he turns and starts firing back at adversaries like he would hecklers at a comedy club. Readers can escape their troubles by enjoying this first-hand account of a comedian juggling every segment of small-town drama. Get your copy now