Whip: Leading the Progressive Battle During the Rise of the Right (Hardcover) 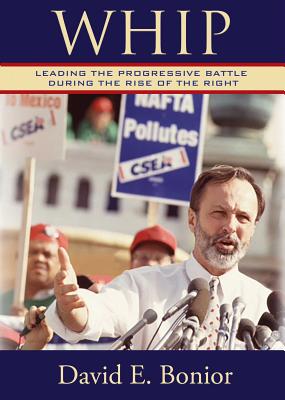 By David E. Bonior
Email or call for price
Out of Print

Few in Congress have accomplished more than David Bonior on behalf of average Americans. Whip is the story of how he did it.

In Eastside Kid, the first volume of his autobiography, former Congressman David Bonior recounted the upbringing that formed his lasting principles: love of the underdog, a passion for social justice. In Whip, he tells us how he put those principles to work as a member—and a leader—of the US House of Representatives.

David Bonior spent twenty-six years in Congress, compiling a record as one of Washington’s most effective progressives. Respected by his colleagues for both his personal integrity and his legislative savvy, Bonior was elected by his party’s caucus to serve for eleven years as Democratic Whip, one step below Leader in the party hierarchy.

From his arrival in Congress in 1977 Bonior was determined to make an impact. In the ‘70s he organized the effort in Congress to recognize the neglected needs of Vietnam veterans. In the ‘80s, he was Ronald Reagan’s most dogged congressional foe over US support for the Nicaraguan Contras. In the ‘90s he became the public face of opposition to NAFTA. No one was more responsible for the downfall of Newt Gingrich—except perhaps Gingrich himself. And when Bill Clinton finally confessed his affair with Monica Lewinsky, it was Bonior who mobilized House Democrats to resist calls for the president to resign. Fueled in equal part by his working-class values and by the zeal for competition he developed as a star high-school athlete, Bonior never failed to fight the good fight.

Bonior takes us backstage at Congress, where his brilliance as a legislative tactician helped turn ideas into law. But Whip is no dry, inside-the-Beltway recitation of names, dates, and bills. We are treated to vivid portraits of the people Bonior worked with, such as Speaker Tip O’Neill and both Presidents Bush. And we learn that once upon a time, Republicans and Democrats socialized together—at the White House Christmas party and the House gym.

Key to the Bonior story was his ability, as a leading progressive, to keep winning reelection in a district renowned as the home of the Reagan Democrat.  We see him meeting constituents at barbecues and farms, post offices and small-town parades. And we see his trademark, the pine seedling: In his quarter-century of electioneering and outreach, he distributed a million of them. “Bonior trees” still dot his district.

Few in Congress have accomplished more than David Bonior on behalf of average Americans. Whip is the story of how he did it.

David E. Bonior is contributing funds from the sale of this book to Mikva Challenge (www.mikvachallenge.org)

“David Bonior was my mentor when I came to Congress.”

“David Bonior never hesitated to take on the powerful on behalf of the powerless. How did this boy from Detroit grow up to become one of the most progressive legislators Congress has ever seen? Read Eastside Kid and find out.”

Born in Detroit, Michigan, on June 6, 1945, David Bonior was educated in Catholic schools that included Sacred Heart Seminary and Notre Dame High School. He received a football scholarship from the University of Iowa, graduating in 1967 with a BA in political science and sociology.

From 1968 to 1972 he served as an enlisted airman in the United States Air Force. During that period he also earned his MA in history from Chapman College, in California. After military service he worked as an adoption caseworker.

In 1972 David launched his first campaign for public office; that November he was elected to the Michigan state legislature. In 1976 he won a seat in the U.S. House of Representatives, where he quickly developed a reputation as one of Washington’s foremost champions of progressive causes and issues. In 1991 his colleagues in the Democratic Caucus elected him as their whip, a position he held for eleven years.

After leaving Congress at the end of 2002, David founded American Rights at Work, a workers’ rights advocacy organization, and was appointed University Professor of Labor Studies at Wayne State University. He has authored three previous books: The Vietnam Veteran: A History of Neglect, Walking to Mackinac, and Eastside Kid, a memoir.