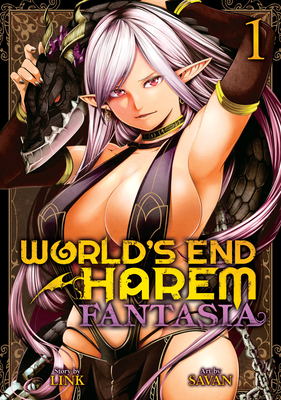 
Usually Ships in 3-7 Days
An all-new fantasy tale of doom and desire from the creator of World's End Harem! In a world of swords and sorcery, Lord Arc--heir to the modest land of Nagara--is a gentle soul thrown around by political forces. After watching Aurelia, his long-time love, end up promised to a more powerful man, Arc curses his weakness--until a seductive Dark Elf appears, promising him strength beyond his wildest dreams. She tells Arc that he has a mysterious force deep inside him, and with training and a course of arcane sexual rituals, he can unlock it to become a man of immeasurable power. Little does Arc know that world-threatening doom is coming to the land, and his new magical force will draw countless beautiful warrior women to his side, hungry to join him on the battlefield...and in his bed.
LINK is a bestselling Japanese writer best known for the manga World's End Harem and its spin-offs, including World's End Harem: Fantasia. SAVAN is a Japanese manga artist and writer best known as the artist of World's End Harem: Fantasia.