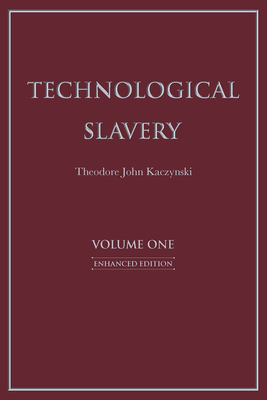 
Usually Ships in 3-7 Days
Logical, lucid, and direct, Technological Slavery radically reinvigorates and reforms the intellectual foundations of an age-old and resurgent world-view: "Progress" is a myth. Wild nature and humanity are fundamentally incompatible with technological growth. In Technological Slavery, Kaczynski argues that: (i) the unfolding human and environmental crises are the direct, inevitable result of technology itself; (ii) many of the stresses endured in contemporary life are not normal to the human condition, but unique to technological conditions; (iii) wilderness and human life close to nature are realistic and supreme ideals; and, (iv) a revolution to eliminate modern technology and attain these ideals is necessary and far more achievable than would first appear. Drawing on a broad range of disciplines, Kaczynski weaves together a set of visionary social theories to form a revolutionary perspective on the dynamics of history and the evolution of societies. The result is a comprehensive challenge to the fundamental values and assumptions of the modern technology-driven world, pinning the cause of the rapidly unfolding catastrophe on technology itself, while offering a realistic hope for ultimate recovery. Note: Theodore John Kaczynski does not receive any remuneration for this book.
Theodore John Kaczynski, Ph.D. (a.k.a. Ted Kaczynski) has focused his life’s work on sounding the alarm about society’s paramount problem: the omnipresent, subjugating, and destructive force of technological progress. His extensive writings articulate a comprehensive critique of the global “techno-industrial system” and forecast its catastrophic consequences for humankind and the biosphere. His recent works focus on realistic strategies for collective action to alter the current trajectory of society, and avoid unmitigated disaster. Dr. Kaczynski was born in 1942 in Evergreen Park, Illinois.
"He is clearly a Luddite, but simply saying this does not dismiss his argument... As difficult as it is for me to acknowledge, I saw some merit in the reasoning in [Kaczynski's writing]." — Bill Joy, founder of Sun Microsystems, Wired Magazine


"There is nothing in [ISAIF] that looks at all like the work of a madman. The language is clear, precise and calm. The argument is subtle and carefully developed, lacking anything even faintly resembling the wild claims or irrational speculation that a lunatic might produce." —James Q. Wilson, Ph.D., former president of the American Political Science Association


“Kaczynski understands what those of us more fully participating in the technological system are unable to fully appreciate: that technological society is beyond rational human control and will result in cataclysmic harm. What he presents is a sound moral argument with what should be eye-opening historical social illustrations that are, together, too numerous to refute.” —Jai Galliott, Ph.D., School of Engineering and Information Technology, UNSW Canberra

"His work, despite his deeds, deserves a place alongside Brave New World, by Aldous Huxley, and 1984, by George Orwell." —Dr. Keith Ablow, Fox News

“I recommend that you read this compelling perspective on how we can frame our struggles in a technological society.” —The Tech, MIT’s oldest and largest newspaper

“Anti-Tech Revolution is a true milestone in thinking about technology. It is a well-researched, well-written, and thoroughly-documented work dedicated to undermining the technological system before its worst consequences become reality. Nothing else like it exists. All those concerned with the future of humanity and the planet would do well to study it carefully.” —Prof. David Skrbina, University of Michigan, Dearborn

“There are more than a few people who feel that society’s rush toward a technological future will lead to disaster . . . This is very highly recommended.” —Midwest Book Review

“In this thoughtful book, Dr. Kaczynski provides a blueprint for the radical anti-technology movement. If you want to stop AI before it’s too late, this may be your best bet.” —Dylan Evans, Ph.D., author, The Utopia Experiment

“What [Kaczynski] presents is a sound moral argument with what should be eye-opening historical social illustrations that are, together, too numerous to refute.” —Jai Galliott, Ph.D. School of Engineering and Information Technology, UNSW Canberra