China Love You: The Death of Global Competition (Paperback) 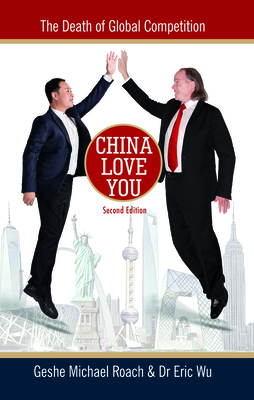 Every year in America there is a Super Bowl, an annual war between the best two football teams in the country. Net income for Coca Cola is running a few billion dollars a year ahead of its bitter rival, Pepsi Cola. Recent news reports say that China has outdone the USA in rankings for the world's fastest supercomputers; but America bested China in the gold medals at the last Olympics. Competition is built into the American way of life. But is it the best way to live? When we perceive the world as a football game--as a competition to beat others so we can be the best and biggest--is there a human cost that all of us pay? If the two largest superpowers in the world have a trade war, does anybody truly win? China Love You is a book written by two prominent business people, one from America, and one from China. It tells the story of how both of them came across the same ancient book from Asia--the Diamond Cutter Sutra--in their early years, and used its wisdom to build two highly successful companies, one in New York and one in Beijing. Later, they met each other working on a business collaboration, and became close friends. In this book, they help all of us understand the differences between China and America, and give some revolutionary suggestions about how the two countries can work together, each helping the other to become more successful than ever before. What could the world be, if the two biggest economies made it their goal to make each other successful? And what will happen if we keep up the grand football game: What will happen to our children and our planet, if there is a second Cold War, and it goes bad? China Love You offers some solutions that could make the difference, for all of us.

Geshe Michael Roach is an honors graduate of Princeton University and has received the Presidential Scholar Medallion from the President of the United States at the White House. He is also a recipient of the McConnell Scholarship Prize of Princeton's renowned Woodrow Wilson School of International Affairs. Michael is the first westerner in the 600-year history of Sera Mey Tibetan Monastic University to be awarded the degree of Geshe, or "Master of Philosophy." He has also received an honorary doctorate for lifetime achievement in the Congress of Mexico, in 2015. Michael is the founder of the Asian Classics Input Project (ACIP), which has digitally preserved thousands of ancient Asian books by training and equipping poor people in many countries to do input work during the past 33 years. More than 10,000 searchable manuscripts representing 25 centuries of ancient Asian philosophy are now available free, online, at ACIP's website. ACIP was founded during Michael's time at Princeton, with the help of the Hewlett Packard Foundation. To contribute towards the expense of this work, Michael helped found Andin International Diamond Corporation of New York, which reached US$250 million in sales and was sold to super-investor Warren Buffett in 2009. In 2000, Michael wrote The Diamond Cutter, The Buddha on Managing Your Business & Your Life, which has become an international business bestseller, and tells the story of how he used ancient Asian principles for success. He is the author of over 30 other volumes, including the best-selling How Yoga Works. In 2010, he founded the Diamond Cutter Management Training Institute (DCI), which provides management and personal success training to about 35,000 people each year, in more than 20 countries of the world. This was followed in 2016 by the founding of the Sedona College of International Management (SCIM), which trains DCI teachers for about 25 different countries. The college also houses the Mixed Nuts Translation Group, which annually produces about 1,000 pages of original translations of the ancient classics of Asian literature. Michael is active in other causes. In 1993 he founded the Asian Classics Institute (ACI), which offers a 36-course program of study totaling 6,800 pages of translations for the traditional course material of a master of Tibetan Buddhism (Geshe). In 2003, after completing a 3-year silent retreat, he helped found Diamond Mountain Retreat Center, one of the largest centers of this kind in the world. In recent years he has helped found the Seeds for Peace program, which provides vocational training for refugees fleeing conflicts in the Middle East. Dr Eric Wu was born in China and graduated in both western and traditional Chinese medicine. He then worked in the Chinese national banking system, before founding his own management training company, called Guang Yao ("Light on Life") Cultural & Educational Institute, of Beijing and Xi'an, China. This firm seeks to extract the essence of Chinese traditional culture and to bring it to the modern world, based on a concept Dr Wu calls "The Power of Seeds." This system has proven very effective in increasing business profitability and sustainable corporate development; and has been applied as well in the fields of addiction treatment; youth education; and the enhancement of the quality of life for senior citizens. In recent years, Eric has also founded advanced medical research facilities which are making significant progress in finding cures for cancer, heart disease, and diabetes. He is a popular speaker worldwide, and has developed innovative educational programs for children throughout China. Eric has a deep interest in the preservation of Chinese traditional culture, and through his Golden Silk Road Foundation has sponsored many projects such as the Silk Road Classics Online Library, which offers thousands of manuscripts from the languages of the ancient silk road, free of charge.