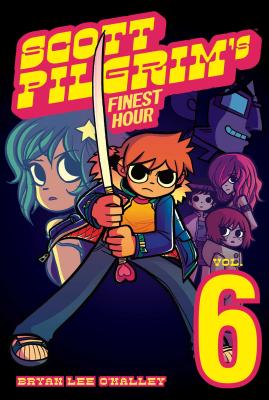 This is book number 6 in the Scott Pilgrim series.

It's finally here! Six years and almost one-thousand pages have all led to this epic finale! With six of Ramona's seven evil exes dispatched, it should be time for Scott Pilgrim to face Gideon Graves, the biggest and baddest of her former beaus. But didn't Ramona take off at the end of Book 5? Shouldn't that let Scott off the hook? Maybe it should, maybe it shouldn't, but one thing is for certain—all of this has been building to SCOTT PILGRIM'S FINEST HOUR!
Bryan Lee O'Malley is a Canadian cartoonist best known for the bestselling, award-winning Oni Press series "Scott Pilgrim" (2004-2010). "Scott Pilgrim" was adapted into a critically-acclaimed major motion picture (from Universal) and video game (from Ubisoft) in 2010. O'Malley lives in Los Angeles, where he continues to make comics.