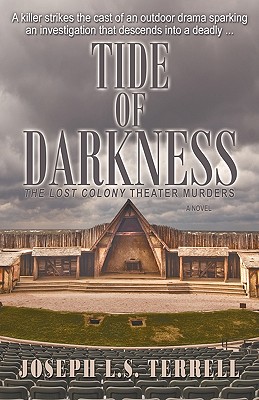 
Usually Ships in 3-7 Days
This book cannot be returned.
TIDE OF DARKNESS
The Lost Colony Theater Murders True-crime writer Harrison Weaver arrives at North Carolina's picturesque Outer Banks seeking peace and quiet. But his resolve to avoid even thinking about murder is dashed when he discovers, on the night of his arrival, that the body of another young female cast member of The Lost Colony outdoor drama has been found strangled and thrown into Croatan Sound--a killing eerily similar to an unsolved case that first brought Weaver to the Outer Banks four years earlier. Despite his promise to himself, Weaver is drawn into the investigation--only to find that he may be the killer's next victim.

"Joseph Terrell knows the Outer Banks--its geography, its quirks, its people and their foibles. Well conceived and well written, TIDE OF DARKNESS is a smart, savvy combination of who-done-it and police procedural. A welcome new entry to the Southern mystery tradition."
--Kathryn R. Wall, author, the Bay Tanner mysteries