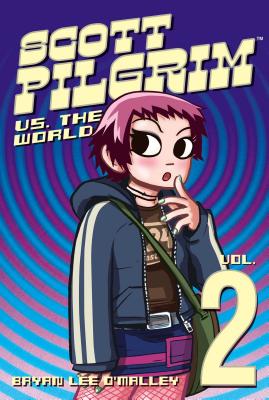 This is book number 2 in the Scott Pilgrim series.

Does Scott and Ramona's burgeoning relationship have a future? Isn't Scott still supposedly dating Knives Chau? Who is Ramona's second evil ex-boyfriend, and why is he in Toronto? Who are The Clash At Demonhead, and what kind of bizarre art-punky music do they play? Who's their hot girl keyboardist, and what is Scott's relation to her? Why is The Clash At Demonhead Knives Chau's new favourite band? Fights! Drama! Secrets revealed! The answers to all these questions and more!
Bryan Lee O'Malley is a Canadian cartoonist best known for the bestselling, award-winning Oni Press series "Scott Pilgrim" (2004-2010). "Scott Pilgrim" was adapted into a critically-acclaimed major motion picture (from Universal) and video game (from Ubisoft) in 2010. O'Malley lives in Los Angeles, where he continues to make comics.