Clash of the 90s: The raddest decade in a game (Novelty book) 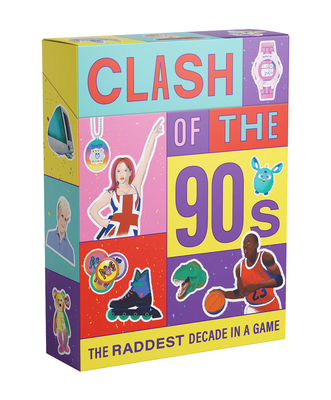 Clash of the 90s: The raddest decade in a game (Novelty book)


Not Yet Published
Stop bugging and crack open this card game to decide on the greatest ’90s icon once and for all.

The flip phone or the Nintendo 64? The Spice Girls or Britney Spears? Home Alone or a Tamogotchi?

While we already know that the 1990s was the coolest decade in recorded human history, what was the pinnacle of culture in the era of CD-ROMs and Pogs, Dawson’s Creek and butterfly clips? Clash of the 90s is here to decide.

To play, pass the cards out until none remain—but no peeking! In turns, flip the first card in your pile and pick from one of six categories: Novelty, Radness, 90s-ness, Influence, Game Changer, or Legacy. Each has a numerical value. Read one out, and if your icon beats the rest, take all the played cards from that round. Play until one winner claims the entire decade.
Niki Fisher is an artist and designer living in the skiing hub of Jindabyne, Australia. Her illustrations have appeared in Monocle, Oyster Magazine, Lonely Planet compendiums, and elsewhere.