How to Apologise for Killing a Cat: Rhetoric and the Art of Persuasion (Hardcover) 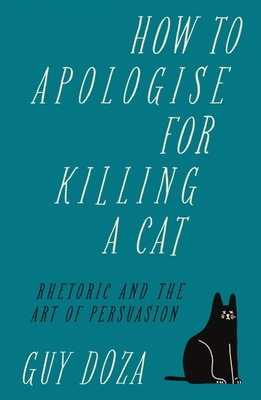 How to Apologise for Killing a Cat: Rhetoric and the Art of Persuasion (Hardcover)


Email or call for price.
'Most books on persuasion teach the few how to sway the many. With wit and vim, Guy has given us something else: an X-ray into the tactics of those trying to change our minds and behaviour.' - Stephen Krupin, former speechwriter for Barack Obama

When Winston Churchill spoke in Parliament, he convinced an empire to go to war. When Martin Luther King spoke in Washington, he convinced millions to open their hearts to change. When Oprah Winfrey said: 'Do what you have to do until you can do what you want to do, ' she also used rhetoric. As we have here, by deploying the rule of three to stress a point.

Rhetoric - the art of persuasive speaking and writing - often gets a bad rap. In this dazzling, fast-paced guide, speechwriter Guy Doza rescues rhetoric from the shadows and showcases its immense power to change lives, for good and bad.

Highlighting punchy sayings from Ancient Rome to modern marketing, he shows how leaders, businesses and even our own friends use rhetorical techniques every day to make convincing arguments.

What's more, this guide to rhetoric will show you how to learn to use this persuasive language in your own life:

- How to convince an investor to back your venture

- What to say to a potential lover in a bar

- And, the six rules of apology you should use if you ever accidentally run over the next-door neighbour's cat...

How to Apologise for Killing a Cat is a quick read, humorous and highly practicable. It decodes the tricks and techniques of rhetoric for everyday readers.

It's the only book you need to make a convincing marketing pitch.

It's the only book you need to give a rousing speech.

It's the only book you need to write persuasively.

It's the best book to explain the technique we've just used here. After reading this book, you will start to see the trick of rhetoric used everywhere.

After reading this book, you will never see the world the same way again

Have you ever had that unpleasant anxiety of taking your car to the mechanic and feeling like you're being swindled? Most of you will probably know exactly what I am talking about. We don't know how cars work, we don't know what the parts are called and we don't know how to fix them ourselves. This lack of knowledge makes us vulnerable and susceptible to exploitation, and we know it. So does the mechanic.

Now, most mechanics are honest individuals, not rogues, but can we say the same of people who run countries and big companies? When it comes to ordinary life away from the car engine or central heating boiler, most of us don't even realise just how vulnerable we are. People can use persuasive language to swindle us, cheat us, and exploit us to the hilt. And the worst part is that we are not even aware that it is happening.

Welcome to rhetoric, the art of persuasion. Rhetoric is a superpower. It can alter the way we think, the way we behave and sometimes even the way we live our lives. And its most explosive charge lies in its subtlety. We need to be aware of how such persuasive language is used, not only so that we can be more persuasive ourselves, but defend ourselves against the rhetorical advances of those who would seek to exploit us.

For too long, rhetoric has been a dark and ancient art confined to the secretive circles of politics and academia. This mystery and misunderstanding has often led to the public to consider it to be the tool of crooks, spin doctors and villains. But no more The time has come to bring rhetoric out of the darkness and show it for what it is: a mighty linguistic tool. Whether it is a conversation between friends in a caf , a pathetic attempt to flirt at a bar, or a meaningful conversation with a world renowned philosopher, rhetoric is everywhere.

Buy the book to carry on reading