Say We Won and Get Out: George D. Aiken and the Vietnam War (Paperback) 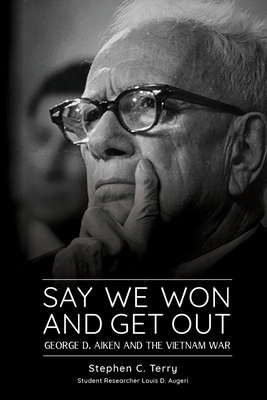 George D. Aiken, a hillside farmer and a liberal Republican Depression-era Governor, rose to national prominence as a leading GOP U. S. Senator and enduring critic of the Vietnam War from 1962-1975. Aiken's long-standing friendship with Senate Majority Leader Mike Mansfield, an unheard of political alliance in today's sharply divided Washington, forged bi-partisan opposition to the war. Aiken was neither "hawk" nor "dove", but a "wise owl" who spoke his mind forcefully and bluntly to all against the war. He advised President Johnson to declare that the U. S. won the Vietnam War and to get out. Later, Aiken told President Nixon to stop bombing in Cambodia or he couldn't be elected "dogcatcher." This is pure Aiken speaking truth to power for ending America's most controversial war, a common-sense voice that the Nation sorely needs today.

This book demonstrates that bi-partisan Senate leadership has worked in the past and must be present in order to solve urgent national problems. Senator Aiken was a catalyst for forging consensus on issues from civil rights to foreign policy by being open-minded to all ideas that would help his constituents. Aiken's philosophy was always to help people first. He never made decisions based on his party, a lost art in the current political environment. A Senator like George Aiken today would help show how to restore bi-partisanship.