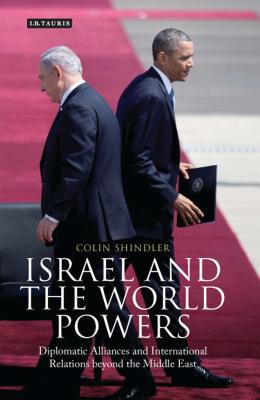 By Colin Shindler (Editor)
Email or call for price

Israel's relations - or lack of them - with Muslim countries throughout the Middle East and the Islamic world are subject to repeated analysis and scrutiny in both the media and academia. But what have previously been less examined are Israel's relationships with the rest of world: from the former colonial states of Britain and France to the superpowers of the US and Russia and to emerging and regional powers such as China, India and Brazil. The diplomatic ties between Israel and these various world powers have been determined by numerous factors. A central and dominating one has, of course, been the Israeli-Palestinian and the Israeli-Arab conflicts. Yet since the signing of the Oslo Accords in the mid-1990s, there has been a remarkable development of ties between Israel and the world on many levels - trade, technology, science, security and military hardware. However, the development and strength of these relationships differ from country to country, from historical epoch to historical epoch.
Conventionally seen as a state isolated from its Arab neighbours and irrevocably allied with the US, Israel is examined here in the light of efforts to strengthen diplomatic ties with other powers, such as its relationship with post-World War II Germany and the EU. Furthermore, Israel and the World Powers looks at the ways in which, despite the profound intertwining of Israeli and American foreign policy, the US-Israeli relationship hasn't always been an easy one. With most American Jews being broadly of a more liberal bent than the rest of the US, they often support the peace camp in Israel, whereas it is the Christian evangelicals in the US that tend to support the Israeli right. Taking into consideration the fact that relations with Turkey have cooled significantly following the raid on the Gaza flotilla in 2008, Israel has been forced to look even further for support and alliances. It is by looking at Israel's relations with established and rising world powers that this book offers vital analysis for researchers of both Middle East studies and International Relations.

Colin Shindler is Professor in the Department of the Languages and Cultures of the Middle East, the School of Oriental and African Studies (SOAS), University of London, UK. He is the author of The Land Beyond Promise: Israel, Likud and the Zionist Dream (2002) and The Triumph of Military Zionism: Nationalism and the Origins of the Israeli Right (2010), both with I.B.Tauris.