Counterrevolution: Origins and Consequences of the Rise of the Extreme Right (Agrarian Change & Peasant Studies #9) (Paperback) 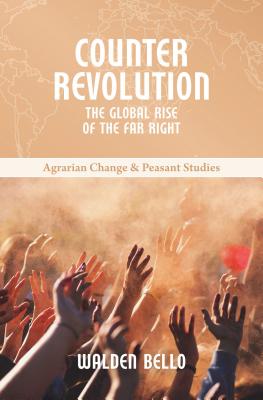 By Walden Bello
Email or call for price
Special Order

The far right is on the rise. The rhetoric of anger and resentment emanating from personalities like Donald Trump, Marine Le Pen, Rodrigo Duterte and Viktor Orban is captivating and mobilizing large numbers of people. In an increasing number of countries, the extreme right has already captured the government or is on the threshold of power. While this swift turn of events has shocked or surprised many in the North, the extreme right's seizure of power is not an uncommon event in the South. In Counterrevolution, Walden Bello deconstructs the challenge from the far right by deploying what he calls the dialectic of revolution and counterrevolution and harnesses the methods of comparative history and comparative sociology. Using case studies from Italy in the 1920s, Indonesia in the 1960s, Chile in the 1970s and contemporary Thailand, India and the Philippines, Bello lays bare the origins, dynamics and consequences of counterrevolutionary movements. Reflections on the rise of the right in the United States, Europe and Brazil round out this remarkable and timely study by one of the premier intellectuals of the South. Walden Bello is the International Adjunct Professor of Sociology at the State University of New York at Binghamton and co-founder of the Bangkok-based research institute Focus on the Global South. He is a recipient of the Right Livelihood Award (aka Alternative Nobel Prize) and was named the International Studies Association's Outstanding Public Scholar.