24/7: Late Capitalism and the Ends of Sleep (Paperback) 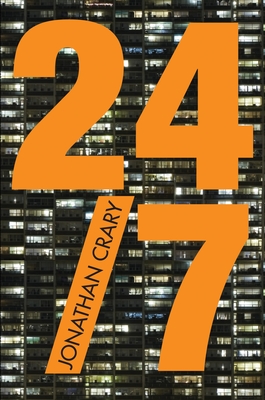 24/7: Late Capitalism and the Ends of Sleep explores some of the ruinous consequences of the expanding non-stop processes of twenty-first-century capitalism. The marketplace now operates through every hour of the clock, pushing us into constant activity and eroding forms of community and political expression, damaging the fabric of everyday life.

Jonathan Crary examines how this interminable non-time blurs any separation between an intensified, ubiquitous consumerism and emerging strategies of control and surveillance. He describes the ongoing management of individual attentiveness and the impairment of perception within the compulsory routines of contemporary technological culture. At the same time, he shows that human sleep, as a restorative withdrawal that is intrinsically incompatible with 24/7 capitalism, points to other more formidable and collective refusals of world-destroying patterns of growth and accumulation.

Jonathan Crary is Meyer Schapiro Professor of Modern Art and Theory at Columbia University. His books include Techniques of the Observer and Suspensions of Perception.

“A polemic as finely concentrated as a line of pure cocaine.”
—Los Angeles Review of Books

“24/7 is the capstone of Crary’s archeology of the spectacle and arguably the most significant of the lot. It’s informed by the erudition of one of the most thorough and original researchers on the planet. The vast bodies of knowledge Crary seamlessly weaves together in 24/7 is reminiscent of the work of Michel Foucault …[and] marked by a moral passion that fuels Crary’s polemic and underscores what’s at stake, specifically the future of the human being in both the physical and emotional sense. Plus, it’s eminently readable.”
—PopMatters

“The 24/7 phantasmagoria of digital exchange impresses the commodity deep into the body’s tissues, leaving only sleep as a partial respite. Jonathan Crary updates Marcuse’s One Dimensional Man with a vigilant critique of the totality of the seemingly eternal present of this pseudo-world.”
—McKenzie Wark, author of The Spectacle of Disintegration

"Crary’s polemic against the demands of 24/7 capitalism brilliantly illuminates the devastating effects of our changed temporality. Enjoined to constant productivity, we consume ourselves, our world, and our capacity collectively to imagine a common future. This is a crucial commentary on the format and tempo of contemporary life."
—Jodi Dean, author of The Communist Horizon

“[An] intelligent and intriguing discussion of how modern monopoly capitalism insinuates itself into the most intimate aspects of our lives … 24/7 is a masterful exploration of the place of the human individual, their dreams and the future of the species in today’s age of nonstop neoliberal capitalism and its multitude of manifestations.”
—CounterPunch

“Written in a style that compels admiration, Crary ranges from technology to literature, theater to social theory, cinema to economics … the book has the great merit of profoundly renewing our conception of sleep.”
—Gilles Bastin, Le Monde (“Book of the Week”)

“An urgent, funny and scary short book about the political stakes of daily life in the 21st century.”
—Mark Kingwell,  Literary Review of Canada

“Crary’s words, whether sumptuous or straightforward, subdued or violent, are like elements of a dream.  But in this book dreaming is political."
—Clément Gyhs, Libération

“A timely and important polemic … it cuts through a lot of the starry-eyed nonsense people talk about the empowering nature of new technologies.”
—Nicholas Lezard, The Guardian (“Paperback of the Week”)

“Crary has produced a brilliant and distressing text that offers no simple solutions.”
—Maya Osborne, Review 31

“Crary’s talent as a pamphleteer is unequaled.”
—Corriere della Sera

“Crary’s central thesis is as original in its conception as it is devastating with regard to the phenomena it analyses.”
—Jacques Dubois, Mediapart

“Crary seamlessly weaves together art-historical examples, theoretical concepts, and sociological studies to advance his thesis that sleep (symbolizing a moment of repose in our nonstop lives) is the last bastion of non-capitalistic society.”
—Jeanne Gerrity, Art Practical

“Sleep, for Crary, is part of the everyday that has yet to be fully integrated, where we are vulnerable but also capable of moving into other forms of time. As such, sleep is a resource not only for physiological renewal, but one that provides, the book proposes, an exemplary space for rethinking the basis of the relationship of politics, the imagination and processes of living.”
—Matthew Fuller, Mute