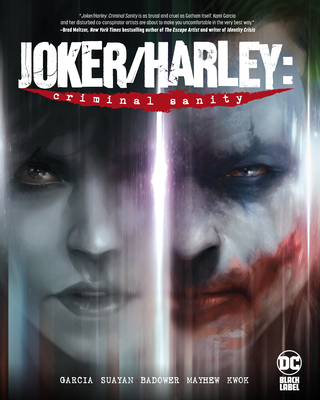 Murder is his art. Catching killers is hers.

In Gotham City, heinous acts of violence are a daily occurrence. Harley Quinn, forensic psychiatrist and profiler, consults with the GCPD on
their worst cases. But she is fixated on an unsolved murder that haunts her—the night she discovered her roommate’s body marked with the
signature of a notorious serial killer known as The Joker.

Five years later, the case remains unsolved, and a new series of horrific killings has begun. As the murders escalate and the meticulously
constructed crime scenes become more elaborate, Harley’s obsession with finding the depraved psychopath responsible leads her down a
dangerous path. When the past and the present finally collide, Harley has to decide how far she is willing to go—and how many lines she is
willing to cross—to solve these cases once and for all.

"Joker/Harley: Criminal Sanity is as brutal and cruel as Gotham itself. Kami Garcia and her disturbed co-conspirator artists are about to make you uncomfortable in the very best way.” —Brad Meltzer, New York Times bestselling author of The Escape Artist and writer of Identity Crisis

“Reads like a cinematic trip, a breathtaking sojourn through the tangled minds of psychopaths. Chilling writing and the art is off the charts.” —Josh Malerman, New York Times bestselling author of Bird Box and Goblin

“Gritty, gripping, and suspenseful—a fresh vision of Harley Quinn and the Joker, and a darkly vivid story.”—Meg Gardiner, bestselling author of the Unsub series

“Joker/Harley: Criminal Sanity is methodical, disturbing, and incredibly compelling. Harley is brilliant, formidable, and absolutely not to be f’d with.”—Kelly Sue DeConnick, writer of Bitch Planet and Captain Marvel

“Kami Garcia, Mico Suayan, Jason Badower, and Mike Mayhew bring some things to the legends Joker and Harley that no one else has done before! A mesmerizing treat even for those who think they know all there is to know about these characters.” — Brian Michael Bendis, writer of Alias and Naomi

“Kami Garcia and her amazing artistic collaborators dig deep to create a portrait of Joker and Harley that is as scary and exciting as you’d hope for, but also surprisingly human.” — Jeff Lemire, creator of Sweet Toothand writer of Joker: Killer Smile

“Joker/Harley: Criminal Sanity isn’t just a darkly fresh take on iconic DC characters, it’s also a deep, masterful exploration of the most terrifying corners of human psychology. One of the most gripping series I read this year.” — Scott Snyder, writer of The Batman who Laughs and American Vampire

Kami Garcia is the #1 New York Times, USA Today, and international bestselling co-author of the Beautiful Creatures and Dangerous Creatures novels. Beautiful Creatures has been published in 50 countries and translated into 39 languages. Kami's solo series, The Legion, includes Unbreakable, an instant New York Times bestseller, and its sequel, Unmarked, both of which were nominated for Bram Stoker Awards. Her other works include The X-Files Origins: Agent of Chaos and the YA contemporary novels The Lovely Reckless and Broken Beautiful Hearts. Kami was a teacher for 17 years before co-authoring her first novel on a dare from seven of her students. She is a cofounder of YallFest, the biggest teen book festival in the country. She lives in Maryland with her family.