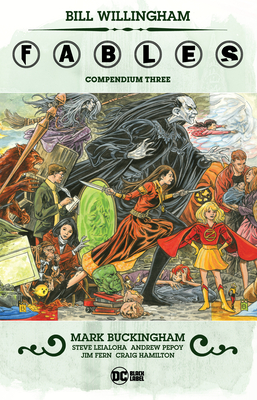 After the great War - the great crossover! This compendium captures all the branching fables that intersect our heroes' stories - from Jack of Fables and The Literals, to the classic short story Werewolves of the Heartland. This volume compiles everything missing from the first two volumes to complete the fables collection for any fan.

Bill Willingham has been writing, and sometimes drawing, comics for more than 20 years. During that time, he's had work published by nearly every comics publisher in the business, and he's created many critically acclaimed comic book series, including Elementals, Coventry, Proposition Players, and of course the seminal Vertigo series Fables, as well as its spin-off series Fairest, Jack of Fables and The Literals. His work has been nominated for many awards, including the Eisner, Harvey, and Ignatz comic industry awards and the International Horror Guild award. He lives somewhere near a good poker room.

Born in 1966 in the English seaside town of Clevedon, Mark Buckingham has worked in comics professionally for the past twenty years. In addition to illustrating all of Neil Gaiman's run on the post-Alan Moore Miracleman in the early 1990s, Buckingham contributed inks to The Sandman and its related miniseries Death: The High Cost of Living and Death: The Time of Your Life as well as working on various other titles for Vertigo and Marvel through the end of the decade. In 2002 he took over as the penciller for Bill Willingham's Fables, which has gone on to become one of the most popular and critically acclaimed Vertigo titles of the new millennium. When not in Clevedon, Buckingham can be found with his wife Irma in the Asturias region of northern Spain.