John Constantine, Hellblazer Vol. 2: The Best Version of You (Paperback) 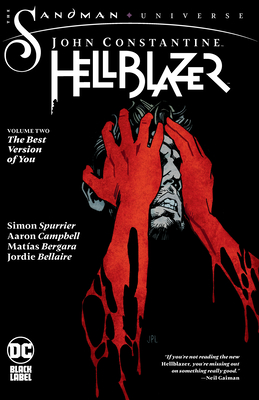 John Constantine, Hellblazer Vol. 2: The Best Version of You (Paperback)

All across England, strange magical occurences are adding up to a bigger picture—but who's behind it and what's their game?

Someone's been going around seeding chaos and wild beasts into the everyday life of the United Kingdom. From the waters of the English Channel to the queen's own personal stables, monstrous births that should not be possible are accelerating. John Constantine can't help but notice that right at the center of these events is some outcropping or another of Britain's worst impulses. But why? Why is he being driven directly toward each one of these events by some unseen hand? And why is the architect of all this madness wearing John's own face?

DC's most beloved bastard magician faces a final reckoning with the darkness lurking in both his own heart and his nation's in one of the most critically acclaimed series of 2020—brought to you by the creative team of Simon Spurrier, Aaron Campbell, Matías Bergara, and Jordie Bellaire. Collects John Constantine: Hellblazer #7-12.
Si Spurrier is a seasoned comics and prose writer at both mainstream and independent publishers, in the U.S. and UK (2000 AD). He has written for DC and Marvel (Suicide Squad, X-Men Legacy) and has several creator-owned fantasy and sci-fi books at Image (Cry Havoc, Angelic). He made his DC Vertigo debut in January 2018 with Motherlands, and has been a pivotal part of DC's Sandman Universe since its launch in 2018. His prose works range from the beatnik neurosis-noir of Contract to the occult whodunit A Serpent Uncoiled.