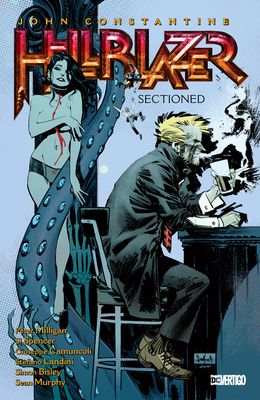 John Constantine is a bastard. But just how much of a bastard?

John Constantine struggles with his sanity as he is haunted by memories of Epiphany. He gets so desperate, he's even willing to summon Shade, the Changing Man! Constantine's journey to sanity is a twisted one that takes him back to Meta to settle old scores.

And will Constantine be able to have his "happily ever after"? After he proposes to Epiphany, will more conspire to stop Constantine from getting married? This time it's different--this time, it's Epiphany. Find out if the uninvited guests from Heaven and Hell suceed in ruining the wedding of the year!

Including the incredible miniseries John Constantine: Hellblazer-City of Demons! When John Constantine is run over by a truck, it takes a little while for England's nicotine-fueled magus to realize that he's perched between life and death. After a few weeks of hospital rehab, Constantine find the London streets VERY different from when he left them behind as a series of occult murders and mutilations demands his attention. The common denominator points back to the E.R. where Constantine was admitted...

Irish writer Peter Milligan joined Vertigo (now DC Black Label) in 1989 with the miniseries SKREEMER and soon became an imprint mainstay, writing both SHADE, THE CHANGING MAN, HUMAN TARGET, ENIGMA, GREEK STREET, and HELLBLAZER. For the DC Universe, he has written Batman in DETECTIVE COMICS and is acknowledged as the driving force behind the "Knightfall" event. He began his comics career with England's 2000 AD, notably its Bad Company serial.