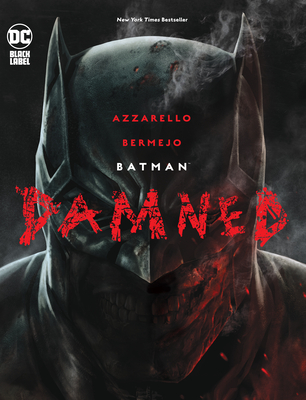 The Joker has been murdered. His killer is a mystery. Batman is the World's Greatest Detective. But what happens when the person he is searching for is the man staring back at him in the mirror?

THE JOKER IS DEAD.

There is no doubt about that. But whether Batman finally snapped his scrawny neck or some other sinister force in Gotham City did the deed is still a mystery.

Problem is, Batman can't remember...and the more he digs into this labyrinthine case, the more he starts to doubt everything he's uncovering.

So who better to set him straight than...John Constantine?

The problem with that is as much as John loves a good mystery, he loves messing with people's heads even more. So with John's "help," the pair will delve into the sordid underbelly of Gotham as they race toward the mind-blowing truth of who murdered The Joker.

Brian Azzarello has been writing comics professionally since the mid-1990s. He is the author of Jonny Double, Batman: Broken City, and the Harvey and Eisner Award-winning 100 Bullets, all created in collaboration with artist Eduardo Risso. Azzarello’s other work for DC includes Hellblazer and Loveless with Marcelo Frusin; Dark Knight III: The Master Race with Frank Miller, Andy Kubert, and Klaus Janson; Superman: For Tomorrow with Jim Lee; Joker and Luthor with Lee Bermejo; Sgt. Rock: Between Hell and A Hard Place with Joe Kubert; Filthy Rich with Victor Santos; and most recently the all-new ongoing series Wonder Woman with Cliff Chiang.

Lee Bermejo began drawing comics in 1997 for WildStorm Studios in San Diego at age 19. He collaborated with acclaimed writer Brian Azzarello on the graphic novels Joker and Luthor, and worked with writer John Arcudi on the Superman feature in Wednesday Comics. He has also worked on Hellblazer with Mike Carey and Global Frequency with Warren Ellis. Bermejo has illustrated the covers to the line of Vertigo Crime graphic novels, beginning with Filthy Rich, written by Brian Azzarello, and Dark Entries, written by Ian Rankin. Bermejo has lived in Italy since 2003.

“An amazing showcase for Lee Bermejo, proving once again that no one can render Batman or Gotham City quite like him." —IGN