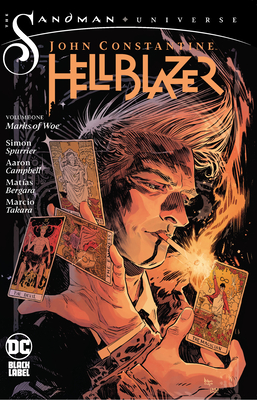 
Usually Ships in 3-7 Days
The bastard is back. England's legendary street-level sorcerer has returned to his grimy roots with a second lease on life. Which leaves him with just one question:

How the hell did that happen?

Brutally retrieved from a tangle of apocalyptic futures and outright insanity, the working-class magus finds himself restored to the haunted shadows of London, where local gangsters are being shredded by terrifying entities. Their boss wants to hire Constantine to help, and without a penny to his name--and with a gun in his face--who is he to say no?

But this isn't an open-and-shut exorcism. To put this madness back in its bottle, John must work with the man who tried to replace him during his missing years, and confront an impossible power with a horribly familiar face...

One of the DC Universe's most iconic characters comes screaming and swearing back to the comics page in John Constantine: Hellblazer Vol. 1: Marks of Woe, courtesy of infernal talents Simon Spurrier, Aaron Campbell, Matías Bergara, Marcio Takara, and more! Collects The Sandman Universe Presents: Hellblazer #1, John Constantine: Hellblazer #1-6, and Books of Magic #14.
Si Spurrier is a seasoned comics and prose writer at both mainstream and independent publishers, in the U.S. and UK (2000 AD). He has written for Marvel and DC (Suicide Squad, X-Men Legacy) and has several creator-owned fantasy and sci-fi books at Image (Cry Havoc, Angelic). He made his DC Vertigo debut in January 2018 with Motherlands, and has been a pivotal part of DC's Sandman Universe since its launch in 2018. His prose works range from the beatnik neurosis-noir of Contract to the occult whodunit A Serpent Uncoiled.