Joe Biden Unauthorized: And the 2020 Crackup of the Democratic Party (Hardcover) 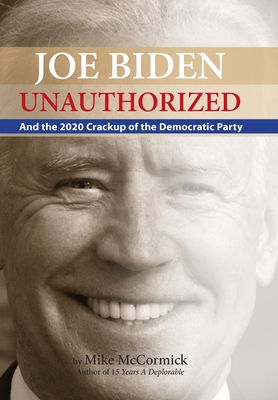 This book is the must-have truth about Joe Biden and the Obama White House coverup of his crooked dealings in Ukraine.

Fast-paced and full of insider knowledge, this book reveals Joe Biden's malfeasance for using his Office of the Vice President to enrich his son Hunter in a quid pro quo as he directed U.S. assistance to Ukrainian natural gas company Burisma Holdings in 2014.

Mike McCormick's eyewitness account is clear and accurate because he WAS THERE in Ukraine and Poland with Joe Biden, as his primary stenographer.

What's worse for the Democrats is that from 2014 to the present, President Barack Obama is guilty of conspiring with his senior advisors to cover up Joe Biden's malfeasance in Ukraine by withholding that information from the public as the House Democrats initiated their partisan impeachment of President Trump.

And they're still trying to get away with it

By the way, have you heard any reporting about Joe Biden's malfeasance or the Obama White House covering it up? No, not at all. But you can read the grimy details here in this book

Author Mike McCormick sheds sunlight on a sordid episode of American history Read how Biden rebuffed Axelrod's warning in a private meeting over breakfast at the Vice President's Residence. View screenshots of White House visitor logs that put Joe Biden at the center of an effort to enrich his son Hunter and his business partner Devon Archer in a quid pro quo for his efforts on behalf of Burisma Holdings -- using U.S. taxpayer money

But this book is about far more than Joe and Hunter's crooked dealings in Ukraine.

Will voters think Joe Biden is strong enough to defeat Donald Trump if they know he was humiliated by Vladimir Putin in Moscow during the Russian "reset"?

Will voters think Joe Biden is smart enough to be president if they know he squandered $1.5 billion in taxpayer money by giving it to Honduran drug dealers and corrupt government leaders in Guatemala and El Salvador to stem the flow of unaccompanied minors?

Will voters think Joe Biden has proven experience if they know he was careless and weak in personal appearances in China and Turkey? How about the tragedy of his failed management of withdrawing U.S. troops from Iraq?

Those who think Joe Biden is their best hope are in for a serious reckoning in the 2020 election. The Democratic Party is cracking up and the reasons are in this book, especially in the chapters titled -- Hollywood, Gays, and Guns and The Greatest Joe Biden Speech You Never Heard.

But this is not an anti-Joe hate-fest. Reasonable readers will also appreciate the author's recounting of Joe Biden's best moments and actions during his vice presidency. This is tough but fair truth told about a flawed American politician who should be respected, yes, but certainly not elected president.

If you are a reasonable American exhausted by the ocean of BS you need to navigate to get the truth about our politicians, you want this book. Buy it Read it Recommend it