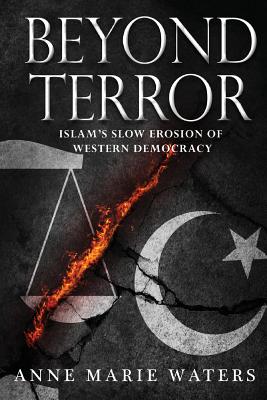 By Anne Marie Waters, Daniel Pipes (Foreword by)
Email or call for price
Usually Ships in 3-7 Days
This book cannot be returned.

In recent decades all criticism Islam is instantly met with labels of 'racism' or 'hate', sabotaging dialogue and silencing concerned citizens. In speaking out on this topic Anne Marie Waters, a British politician has done the unthinkable. Her book, Beyond Terror, addresses Islam's concerted and shocking efforts to undermine the fabric of Western Civilization, and the Orwellian nature of liberal political support of the suppression of basic human rights.

Millions of concerned citizens across all western nations with legitimate concerns about immigration from Muslim societies are labeled 'racists' or 'bigots' by the media, a traditional supporter of free speech. In fact, what many oppose is the spread of Islamic subversion of the rights and freedoms of women, in particular, and the societal norm of freedom of expression previously considered sacred in Western nations. Beyond Terror seeks to ignite public discourse on the future of society and the rights and freedoms produced by Western Civilization.