Letting Go Is All We have to Hold Onto: Mind-Altering Jokes (Large Print / Paperback) 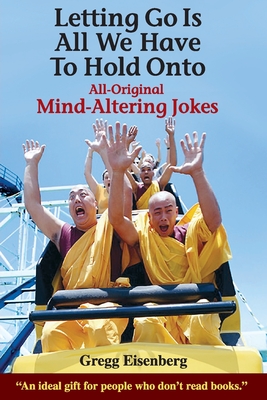 Letting Go Is All We have to Hold Onto: Mind-Altering Jokes (Large Print / Paperback)

All humor is philosophy. But Austrian linguist Ludwig Wittgenstein went further: "An entire treatise of philosophy could be written that consists entirely of jokes." Author Evan Hodkins similarly said: "The next religion will consist of an expansive catalog of humor." And Mexican poet Cesar Cruz added: "All art should comfort the disturbed, and disturb the comfortable."

And now, dear reader, you have stumbled upon a very curious but very relatable collection of all-original humor that blends these ideas together into easy-to-digest, family-friendly, bite-sized nuggets -- known as "The Eisenberg Principles" -- one-sentence laughorisms

From the Preface: It's rare to find a trifecta of thought streams and modalities as unexpectedly intertwined as what we find in this one-of-a-kind collection of original, one-sentence jokes, "laughorisms" known as The Eisenberg Principles. In these one-sentence vignettes, the fields of philosophy and psychology are married into uproariously funny trysts of paradoxical play, each one like a piece of brain-candy which is no less serious in its treatment of the human condition as it is absurd. We are not only afforded a chance to glimpse into the thoughts of this wondrously twisted thinker, we are challenged to follow him into the surprising and impossible rabbit holes of language he unearths on every page.

F. Scott Fitzgerald wrote: "The test of a first-rate intelligence is the ability to hold two opposing ideas in the mind at the same time and still retain the ability to function." This catalog of contradictions puts you through Fitzgerald's test, playing with the principles of paradox and polarity and taking you from the comforts of clich to the chasms of contradiction with just a few strokes of a pen.