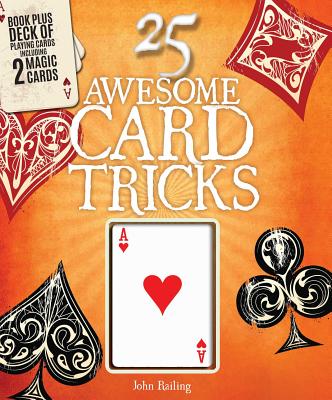 
Email or call for price.
Awesome card tricks that work like magic!

Have you ever wanted to fascinate your friends with illusions? Developed by John Railing, one of the country’s top close-up magicians, this kit will help you learn twenty-five awesome card tricks. The paperback instruction book offers easy-to-follow directions for tricks like Card in a Dream, Mixed Up Aces, Follow the Leader, Kings and Aces, and more! A deck of 54 cards is also included—two of which are trick cards! With a little practice, you can enchant friends and family by performing the card wizardry learned with this kit.

John Railing is a Renaissance man with many interests and a varied business background. Widely considered one of the country’s top close-up magicians, John performs regularly for an impressive roster of celebrities, entertainers, and leading corporate executives, and has performed for U.S. presidents, foreign dignitaries, and heads of state from around the world. He currently performs tableside magic for diners at one of Chicago’s premier restaurants, Swift & Sons. John co-wrote and produced a series of top-selling magic sets called The Ultimate Magic Club, each with its own DVD, for Scholastic Books. Over the past fifteen years, he has consulted on film and stage productions, created illusions for trade fairs and corporate shows, and produced myriad products for the magic and toy industries. His work has included assisting David Copperfield with retail and magic for his new restaurant and entertainment complex; several licensed toys; magic-related candy packaging; magic books; and various other commercial projects involving 3-D printing, optical illusions, and puzzles. John lives in the Chicago area with his wife, Sheila, and their three children: Maxwell, Mia, and Macey.