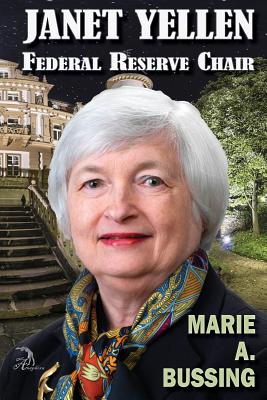 By Marie a. Bussing, Anna Faktorovich (Designed by), Christina Wordham (Editor)
$15.00
Email or call for price.

The Federal Reserve (Fed), organized in 1913, is the central bank of the United States. The Fed is a governmental agency in charge of the nation's monetary policy and the chair of this institution holds one of the most powerful jobs in the world. Why? The United States has the largest economic system of any nation, at near $18 trillion. Janet Yellen was appointed Chair of the Board of Governors of the Federal Reserve System in 2014, serving as Vice Chair prior to the appointment. In 2014, Forbes ranked Yellen the second most powerful women in the world. Yellen is Professor Emeritus at the University of California at Berkeley, having had a long-term academic career. She also served as President and Chief Executive Officer of the Federal Reserve Bank of San Francisco. An asset for the student preparing a biographical work, Janet Yellen: Federal Reserve Chair, provides a peek into the life of the famous central banker. The reader will learn about Yellen's early life, academic and professional career, and economic leanings. Terms and quizzes allow the reader to study the structure and functions of the complex Federal Reserve System.