Defending Trump: A Debate on the Trump Presidency in Real Time (Hardcover) 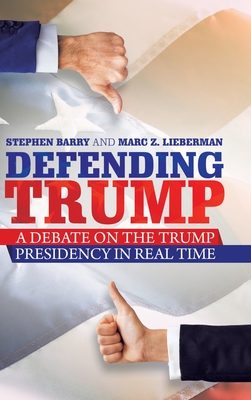 President Donald J. Trump has been the subject of withering attacks on his character and fitness for office since announcing his candidacy for president in 2015. The radical left, Democrats and their media allies, and "Never Trump" Republicans say he poses a threat to the presidency, our governing institutions, and our national character. He's repeatedly accused of being a liar, racist, misogynist and dictator. Stephen Barry and Marc Z. Lieberman, longtime friends with opposite views of Trump, debate his presidency in real time in this book. Through text messages, they highlight the stark divide in how the public views Trump. From Trump's efforts to ban immigration from dysfunctional Muslim-majority countries, to his plans to build a wall on the Mexican border, to his initial response to the coronavirus pandemic, the authors consider the consequences of his actions-as well as his motives. For those who oppose Trump, the underlying theme is that he should not be permitted to exercise the powers of his office. But are they right? See the arguments for Trump as well as why it's imperative that he be allowed to serve.

Stephen Barry has been a practicing corporate lawyer for more than thirty years. As a lawyer and as a conservative living in blue state, he has developed a passion for debating politics. This book is a result of that passion and his belief that political debate can remain civil. Marc Z. Lieberman, one of his oldest friends and a "Never Trumper," debates the Trump presidency with him in this book.