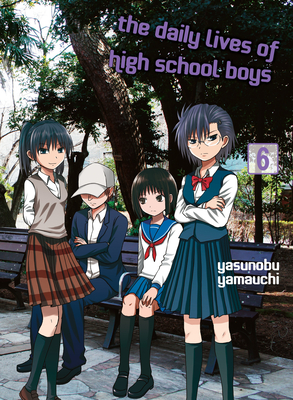 
20XX. Japan is a barren wasteland, and mankind is governed by lawlessness. But in these grim times, a hero shall arise! Known to many as Tadakuni Il Combattante, he journeys in the name of justice with his fellow fighters, Yoshitake and Hidenori, to right wrongs and bring hope to a world drowning in darkness.

In this sixth installment of Tadakuni’s adventures, Il Combattante and his comrades expose untruths, prove their mettle as men, and risk their lives for...sausage?
Wait...no—they’re just ordinary Japanese high school boys with a lot of time on their hands. And their hijinks continue in the latest volume of The Daily Lives of High School Boys!
Yasunobu Yamauchi first broke into the manga scene when he submitted for the Square Enix Manga Contest, and won the Judges' Special Award. The winning work was a rough of "The Daily Lives of High School Boys" which he went on to use as his debut work.
As of date, Yamauchi has 2 completed serlialized manga, worked on anime illustrations and doujinshi.