A President Like No Other: Donald J. Trump and the Restoring of America (Paperback) 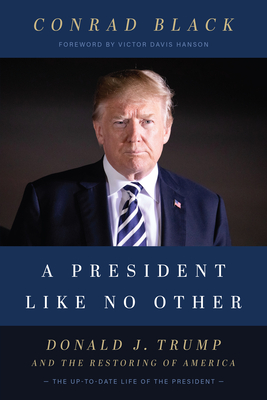 Conrad Black, bestselling author of Franklin Delano Roosevelt: Champion of Freedom and Richard M. Nixon: A Life in Full, turns his attention to his "friend" President Donald J. Trump and provides the most intriguing and significant analysis yet of Trump's political rise. Ambitious in intellectual scope, contrarian in many of its opinions, and admirably concise, this is surely set to be one of the most provocative political books you are likely to read this year.

Conrad Black is a financier and former newspaper publisher who controlled the Telegraph and Spectator titles (UK), Chicago Sun-Times, the Jerusalem Post (Israel), and most of the large newspapers in Canada and Australia, including the National Post (Toronto), which he founded. Black is a widely read commentator on American Greatness, National Review Online, Epoch Times, and elsewhere. He is the author of ten books, including acclaimed biographies of Franklin D. Roosevelt and Richard M. Nixon and a strategic history of the United States. Black is Canadian and British and has been a member of the House of Lords since 2001.