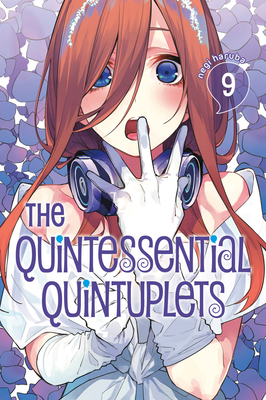 This is book number 9 in the The Quintessential Quintuplets series.

A high school romantic comedy with five times the cute girls! A high school boy must work part-time to help five sisters study so they can graduate, but the only thing these quintuplets have in common is that they all hate studying!

THE STUDENTS BECOME THE TEACHERS?!

As the battle for Futaro rages on, cooperation and competition abound, and more openly than ever. While confessions have made unspoken rivalries heat up, the quints can't ignore how much they helped each other pass their last exams. Now, the idea of tutoring among themselves, and even others, has some sisters rethinking their whole futures, as surprising as it may seem... But with the start of the new school year, the possibilities for learning and love are endless!
Negi Haruba debuted in 2013 with the story "Coward's Crossword" in Kodansha's Magazine Special. Haruba's first series was Purgatory Karma in 2014, followed in 2017 by Quintessetial Quintuplets, which is the artist's first manga to be published in English.