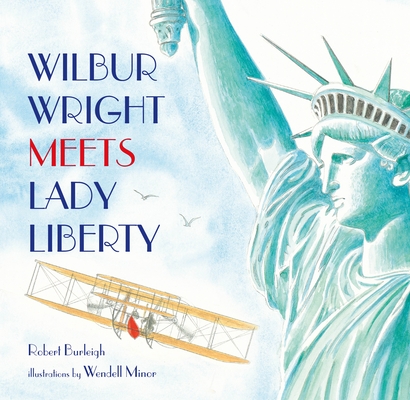 On September 29th, 1909, Wilbur Wright performed his first public flight for a crowd of disbelievers in the New York Harbor, home to the Statue of Liberty. With courage and caution, he put his airplane to the test and flew around the iconic landmark while the crowd observed, breathless.

This minute-by-minute account of Wright’s voyage over New York City captures the weight and the wonder of human achievement. When Wilbur Wright met Lady Liberty, he propelled his dream into the imaginations of many, securing the future of aviation.

ROBERT BURLEIGH has written children's books about many well-known Americans, including Flight: The Journey of Charles Lindbergh and Who Said That? Famous Americans Speak. He lives with his wife in Chicago, Illinois.

Wendell Minor is the award-winning and bestselling illustrator of numerous books, including Ghost Ship, by Mary Higgins Clark. He lives in Washington, Connecticut.

"Though enthusiastic commentary flanks the moment-by-moment account, the description of Wilbur’s skilled, unruffled performance creates an understated tone. Realistic gouache watercolors offer varying perspectives that give scale to both statue and plane. Bookending the story is a second one about a boy who was inspired on that day; intermittent spreads depict sepia-toned portraits of Juan Trippe—who would later found Pan American Airways—alongside imagined spectator comments." —Publishers Weekly

"Burleigh’s exciting account of Wilbur Wright's spectacular demonstration flight around the Statue of Liberty unfolds from two perspectives, captured through different narrative voices and color palettes. . .Fans of early aviation will enjoy this book, but they should make sure not to skip the back matter." —Booklist

"On Sept. 29, 1909, Wilbur Wright, co-inventor of the airplane, piloted his Wright Flyer around the Statue of Liberty for six and a half minutes. Awestruck spectators, most of whom had never witnessed a flight, included journalists, photographers, and 10-year-old Juan Trippe and his parents. Children read/hear the voices of Juan and his parents (set in italicized type), making their presence immediate. This punctuates the dramatic third-person narration, expressed in a terse present tense that adds suspense." —Kirkus Reviews