Olympians: Apollo: The Brilliant One (Paperback) 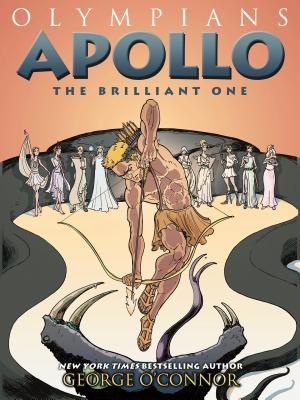 This is book number 8 in the Olympians series.

Mighty Apollo is known by all as the god of the sun, but there's more to this Olympian than a bright smile and a shining chariot. In the latest volume of Olympians, New York Times bestselling author George O'Connor continues to turn his extensive knowledge of the original Greek myths into rip-roaring graphic novel storytelling.

This title has Common Core connections.

George O’Connor is the New York Times–bestselling author of the Olympians, the ongoing series of graphic novels featuring the tragic, dramatic, and epic lives of the Greek gods.

His first graphic novel, Journey into Mohawk Country, pushed the boundaries of the genre as it used as its sole text the actual historical journal of the seventeenth-century Dutch trader Harmen Meyndertsz van den Bogaert. He also illustrated acclaimed playwright Adam Rapp’s Ball Peen Hammer.George is also the creator of popular picture books such as the New York Times–bestselling Kapow! and If I Had A Triceratops. He lives in Brooklyn, New York.

"A shining example of a graphic novel that educates and entertains." —School Library Journal, starred review