The Deal Goes Down (Hardcover) 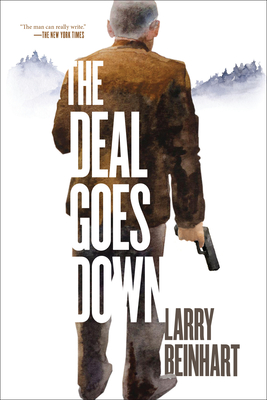 The Deal Goes Down (Hardcover)


Usually Ships in 3-7 Days
A legendary, Edgar-Award winning writer returns, and so does his legendary detective,  with a gripping thriller about marital discord, contract killing, off-piste skiing and the deep state...

Ex-private eye Tony Casella lives in the Catskill mountains, a lonely old tough guy whose body can no longer do what it once did.  His wife and son are dead; his daughter barely talks to him;  his bank is in the process of foreclosing on his home.

But a chance encounter with a rich young woman on a train changes everything. He is hired to take care of  her superrich, sexual predator husband. That job leads to others and he joins  a small start-up whose mission is to save women from abusive marriages. Provided their spouses are in the top 0.01%. It's a luxury service destined to make great profits.

Tony’s problems seem to be over, but are they? An old, angry associate is determined to get his cut of Tony’s earnings, murky government agents start to tail him, and when he is sent to the Austrian alps to kill a Russian oligarch and rescue his American wife, all hell breaks loose…

Packed with action The Deal Goes Down is an unforgettable portrait of a Lion in Winter who still has a few tricks up his sleeve, from a writer garlanded with awards and critical acclaim and whose novel American Hero was made into the classic film, Wag the Dog.
Larry Beinhart is best known as the author of Wag the Dog (originally published as American Hero) on which the film starring Robert DeNiro, Dustin Hoffman, Willie Nelson and Woody Harrelson was based. His No One Rides for Free (1986) received the 1987 Edgar Award for Best First Novel.  Beinhart spent two years in Oxford, England, where he was the Raymond Chandler Fulbright Fellow at Wadham College. His articles have appeared in the New York Times, the International Herald Tribune, the Los Angeles Times, the Washington Post, the Baltimore Sun, and the Chicago Tribune. Beinhart worked for AlJazeera English, on the TV news magazine show Empire as a Writer/Producer/Director. He resides in Woodstock, New York.
"From the gripping opening line…Beinhart never takes his foot off the gas in the outstanding fourth outing for Tony Cassella... Fans of darkly funny crime dramas such as Fargo will be hooked." -- Publishers Weekly, STARRED REVIEW

"There’s enough action in this thoroughly enjoyable comedy of errors to please the most discriminating reader, but it’s the humor that captures." -- Library Journal

"Determinedly offbeat...the enjoyment Beinhart derives from his spritzing, free-wheeling approach lifts the book, which at its best is a cross between Stanley Elkin and Raymond Chandler… A comic noir with a voice all its own.” -- Kirkus Reviews

"Beinhart pulls in the reader quickly...The engrossing murder-for-hire story is fast-paced and flecked with modern themes, from the #metoo movement to racial tension." -- The Times Union

"This book fits into that much beloved subgenre of crime novels in which the protagonists are criminals. Beinhart flips the typical detective trope on its rear in this fourth book in the series by transforming his investigator into a criminal... Here’s the first sentence: “The woman on the train asked me to kill someone.” How could any reader consider setting down a book with an opening line like that one? Impossible, no?" -- The Dayton Daily News

"His dry, often hilarious, heartfelt style is reminiscent of sitting in a dimly lit bar with your coolest friend, listening to his epic stories and sipping Coke after a while because you want to remember every word. No fan of intelligent thrillers should miss this one, but be warned; sometimes “can’t put it down” isn’t just hyperbole." -- Chronogram

"[Tony Cassella's] capers in The Deal Goes Down are truly like no other in literature. He pulls off problem-solving in a way not seen before. The man is slick. So is author Larry Beinhart...It’s good to have Tony back. Let’s hope he never retires again." -- Bookreporter

“Phenomenal…I loved this novel! No one writes in this genre like Beinhart. And very few in any other genre. The things Beinhart does to make the characters breath, get under our skin. What a joy to read!” —Juan José Campanella, director of the Oscar-winning The Secret in Their Eyes