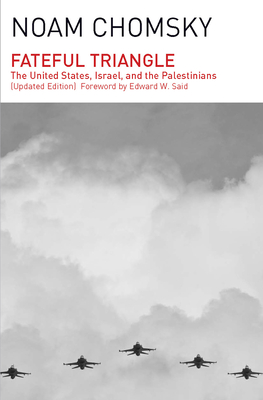 Fateful Triangle is Noam Chomsky's seminal work on Mideast politics. In the updated edition of this classic book, with a new introduction by Chomsky, readers seeking to understand the Middle East and U.S. foreign policy today will find an invaluable tool.

Noam Chomsky is Institute Professor in the Department of Linguistics and Philosophy at the Massachusetts Institute of Technology, Boston. A member of the American Academy of Science, he has published widely in both linguistics and current affairs. His books include At War with Asia, Towards a New Cold War, Fateful Triangle: The U. S., Israel and the Palestinians, Necessary Illusions, Hegemony or Survival, Deterring Democracy, Failed States: The Abuse of Power and the Assault on Democracy and Manufacturing Consent: The Political Economy of the Mass Media. Edward W. Said was University Professor of English and Comparative Literature at Columbia. A member of the American Academy of Arts and Sciences, the Royal Society of Literature and of Kings College Cambridge, his celebrated works include Orientalism, The End of the Peace Process, Power, Politics and Culture, and the memoir Out of Place. He is also the editor, with Christopher Hitchens, of Blaming the Victims, published by Verso. He died in September 2003.