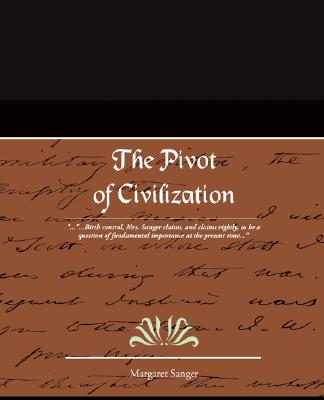 
Usually Ships in 3-7 Days
This book cannot be returned.
...Birth control, Mrs. Sanger claims, and claims rightly, to be a question of fundamental importance at the present time. I do not know how far one is justified in calling it the pivot or the corner-stone of a progressive civilization. These terms involve a criticism of metaphors that may take us far away from the question in hand. Birth Control is no new thing in human experience, and it has been practised in societies of the most various types and fortunes. But there can be little doubt that The Pivot 8 ot of Civilization at the present time it is a test issue between two widely different interpretations of the word civilization, and of what is good in life and conduct. The way in which men and women range themselves in this controversy is more simply and directly indicative of their general intellectual quality than any other single indication. I do not wish to imply by this that the people who oppose are more or less intellectual than the people who advocate Birth Control, but only that they have fundamentally contrasted general ideas, --that, mentally, they are DIFFERENT. Very simple, very complex, very dull and very brilliant persons may be found in either camp, but all those in either camp have certain attitudes in common which they share with oneanother, and do not share with those in the other camp..