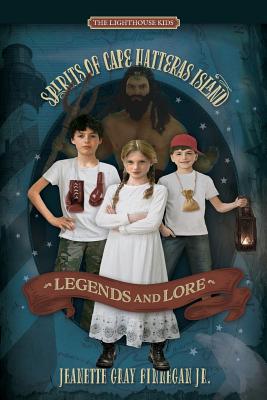 Living in the shadow of the mighty Cape Hatteras Lighthouse, miles from the village, Ellie, Luke and Blake exist in a world of spirits, mystical wolves, and stories told by their grandfather, the keeper of the lighthouse. In this five-volume series, the three children of the Jennette family travel back in time to discover the origin of their ancestors and the events that shaped the civilization of Cape Hatteras Island. Throughout the series, islanders live as they did when only an occasional mail boat kept them connected to the rest of the world: before a bridge linked the island to the mainland, before paved roads, electric lights, running water, before the government became involved in managing the land, and before tourists flocked to the area during the summer season. Isolated from others, they created a life of comfort and community, one that is long lost. In each subsequent volume, the Lighthouse Kids meet the people and experience the events that gradually transformed Cape Hatteras Island to the popular resort area it is today.

In Legacy and Lore, Ellie, Luke and Blake continue their adventures on the island. Through the special powers gifted to them by the chief of the Croatoan Indians and their shauman, Powwaw, the trio encounters the sea god Poseidon who introduces them to their underwater neighbors. Poseidon gives them three dolphin to help the kids explore the vast Atlantic Ocean. Just as their wolves are land-based guardians, the dolphin protect the three from ocean predators and other dangers of the sea. Luke gets a horse, Pegasus, allowing the children to widen their adventures to places away from the lighthouse compound. With this new mode of transportation the children discover the dense woods and an abandoned mansion where they find relics of pirates from long ago.

Also in this volume, the tales of former exploits of those who honed their inventions are related here. Marconi, the SOS that could have saved the Titanic, the trials and triumphs of Billy Mitchell, and the struggle to project the first sound across the ocean.