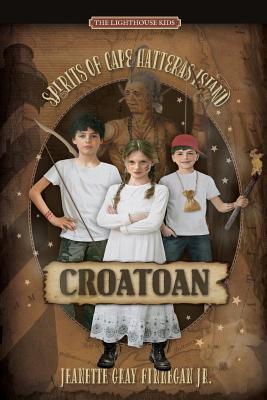 Living in the shadow of the mighty Cape Hatteras Lighthouse, miles from the village, Ellie, Luke and Blake exist in a world of spirits, mystical wolves, and stories told by their grandfather, the keeper of the lighthouse. In this five volume series, the three children of the Jennette family travel back in time to discover the origin of their ancestors and the events that shaped the civilization of Cape Hatteras Island. Throughout the series, islanders live as they did when only an occcasional mail boat kept them connected to the rest of the world----before a bridge linked the island to the mainland, before tourists flocked to the area during the summer season, and before the government became involved in managing the land. Isolated from others, they created a life of comfort and community, one that is long lost. In each subsequent volume, the Lighthouse Kids meet the people and experiencce the events that gradually transformed Cape Hatteras Island to the popular resort area it is today.

In Croatoan, with their wolves as protectors, the trio is transported back to the late 1500's to live with Manteo, the son of the chief of the Croatoan Indians. Taking part in the Native American way of life, they learn to hunt for food, participate in tribal ceremonies, and even take an adventurous trip to the mainland, to extract the first English colony from the hostile indians living across the water from Hatteras Island. This colony historically has been dubbed "The Lost Colony". Through Weroansquoa, the chieftress of the Croatoan Indians, Ellie learns to tap into her spiritual powers. These powers are retained throughout the series of five books on the history of Cape Hatteras. The gifts are used in all the future exploits and adventures as one travels through time to discover the history of this island.